this is a repost because of a technical issue with the previous post.

Thanks for heads-up @Heather Poulsen .

no policy to limit the Feature Update version (all default)

a computer using WU / WuFB does see two different feature upgrades in Settings and both seem be to be downloaded to SoftwareDistribution cache. Effectively the installation in windows.bt will fail because of the conflict starting another round of download.

On "restart now" none of both updates would have been applied but cost bandwidth for the download. 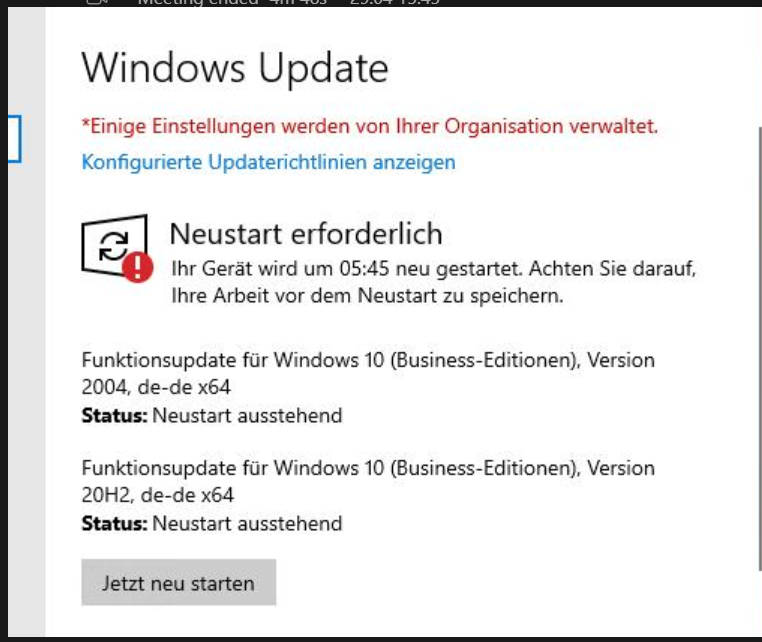 both full installers are downloaded, non will be applied until restart, process starts over, eventually with only 2004 or 20H2.

proposed idea for a solution:
When initiating Feature Update Downloads via WU / WuFB or even WSUS

The USOclient / servicing stack should

- recognize the latest FU version according to Server and/or Policy, if applied.

- remove conflicting upgrades or updates (some have no supersedence marker by design).

- should never download a CU or .net Update at the same time with a feature update*.

Above measures should remove the issue to download outdated updates.
In fact I have too little insights and knowledge about the internals of the process.

Especially this happens regularly. In practice this a very common and unwanted behaviour as the DL and install of a CU or .net update will cause pending restart even before the FU installation is ready.

- causes a lot of unnecessary CPU time / system load as we install CUs that would go into Windows.old anyway.

- it causes to install both the FU and CU one by another while all the time and ressources invested into the FU install will be canceled and reset on restart for the CU. It will start DL (cache) and install again after restart.

It feels like I have seen this more than once when I tested some behaviour for @Aria Carley evaluating how old and outdated version like 1507 or later would behave. Means would they directly download the latest release? No they do not. Mostly they picked some older releases from WU and would cause a 2 time upgrade. But also I have seen this behaviour above, where USOclient ist fetching 2 feature upgrades at a time. even though the softwaredistribution cache was clean.