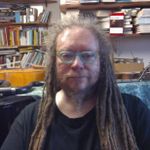 Jaron Lanier coined the terms Virtual Reality and Mixed Reality – and had the first VR startup, manufacturing VR headsets and gloves for the first time, and creating the first surgical simulators, vehicle prototyping, and other apps – all in his youth back in the 1980s. In the 1990s he was chief scientist for Internet2 (the academic consortium charged with making sure the internet would scale) and then of the first company to do AI processing of faces, such as changing identities or adding ornaments; that company went to Google, alas. He’s also known as a constructive critic of technology. He was concerned about how the internet was turning out from way back before it was popular to do that; has written a number of bestselling books on the topic. One of his primary interests is Data Dignity, a sustainable reformulation of the economics of computation. Plenty of awards and accolades, including an IEEE Lifetime Achievement Award, the German Peace Prize for Books, one of the highest literary honors, and multiple honorary PhDs. In 2018, Wired named Jaron one of the 25 most influential figures in tech from the previous 25 years. Jaron’s also a musician specializing in unusual and obscure instruments; in the last year, he played with Sara Bareilles and T Bone Burnett on a #1 single, appeared on Colbert playing with Jon Batiste, and collaborated with Philip Glass.

Likes from
View All
View all