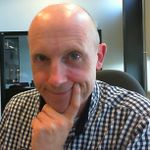 Hi, I'm Mats. I was born in 1967 and live in a village called Hjärup just outside Malmö. I have been in the industry since 1990 and became a MCT in january 2000. I worked as a full time staff trainer between 1998 and 2008 when I became a consultant for Axians (called Qbranch at the time). Today I am a Trusted Advisor at Axians in Sweden and focus a lot of my work on Office 365.