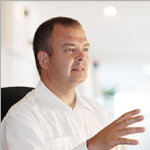 I have been actively programming since 1999, before which I spent three years in iT operations, technical support and network administration. Programming started in the VB based desktop application arena but within one year this switched to Asp, VB 6, and SQL based web development. This continued for a few years until the launch of the .net platform at which point I switched to c#, but continued with web development predominantly developing web based applications. In 2003 I started Nedoweb, a web development company focused on outsourced web development services developing websites and web applications on the Microsoft.net platform, which continues to this day with far more emphasis on Cloud.