First published on TECHNET on Nov 06, 2013
In the previous blog post , I provided a step by step guide to set up Work Folders in a lab environment using the Preview release of Windows Server 2012 R2. With the GA release, Work Folders leverages Windows Failover clustering to increase availability. For general details about failover clusters, see Failover Clustering .

In this blog post, I’ll show you how to configure the Work Folders on failover clusters using the latest Windows Server 2012 R2 release.


Work Folders is a new technology in the File and Storage Services role. Work Folders enables users to sync their work data across their devices using a backend file server so that their data is available to them wherever they are. In the Windows Server 2012 R2 release, Work Folders is supported on traditional failover file server clusters.

To follow this step by step guide, you will need to have the following computers ready:

The computers can be physical or VMs. This blog post will not cover the steps to build the two node clusters; to set up a failover cluster, see Create a Failover Cluster .


This section provides you a checklist on how to setup sync shares on clusters, detailed procedures are covered in the later sections.


The Work Folders role service needs to be enabled on all the cluster nodes. In this blog posts, as I have a two node cluster, I will enable roles on both nodes, by running the following Windows PowerShell cmdlets on each node:

To check if the computer has Work Folders enabled, run

Note: If Work Folders is installed, FS-SyncShareService will be marked with X.


Highly available services are created by using the High Availability Wizard in Failover Cluster Manager. Since Work Folders is part of the File and Storage Services Server role and you have already enabled Work Folders on each node, you can simply create the file server in the cluster, and configure sync shares on the highly available file server. The clustered file server will also be referred as a clustered file server instance, which is often called a cluster name account, virtual computer object, or (VCO).

To create a clustered file server: 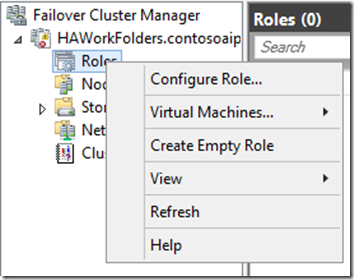 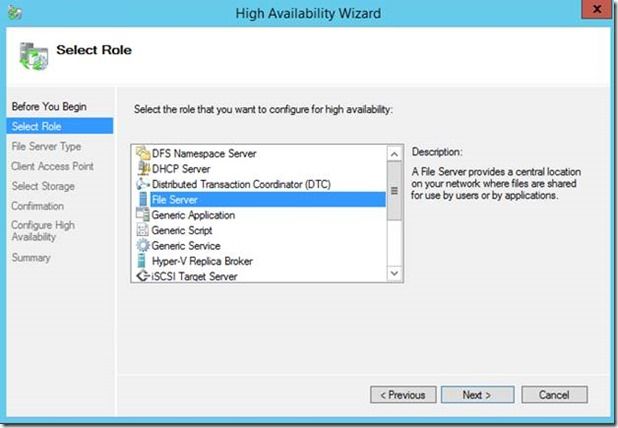 4. Choose the “File Server for general use” option: 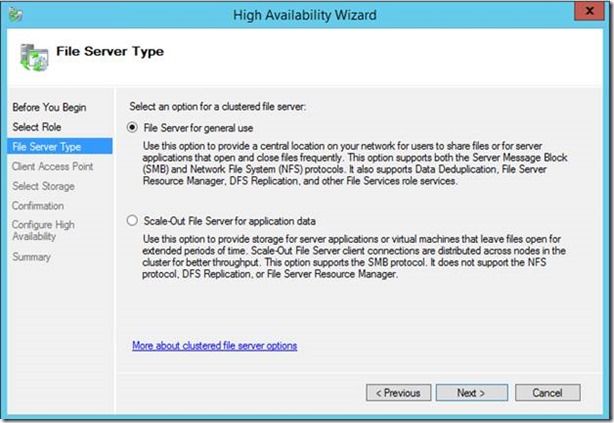 5. Enter a name for the clustered file server instance (VCO). This will be the sync server name used by Work Folders client computers and devices during sync. 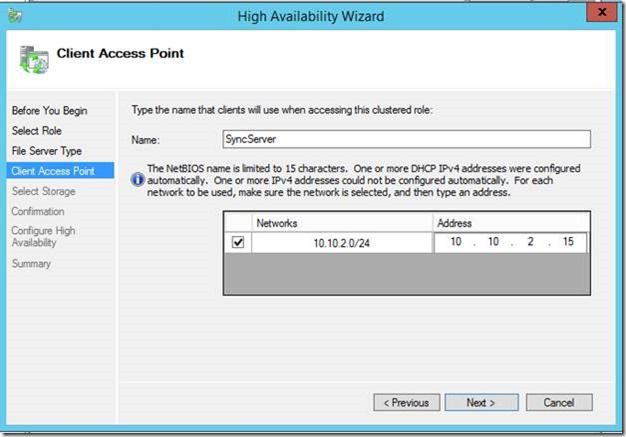 6. Select the disk on which users’ data will be stored. 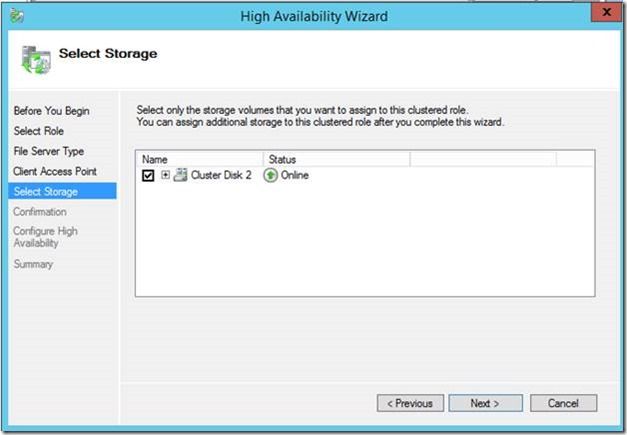 7. Click on the confirmation to proceed on the role creation. 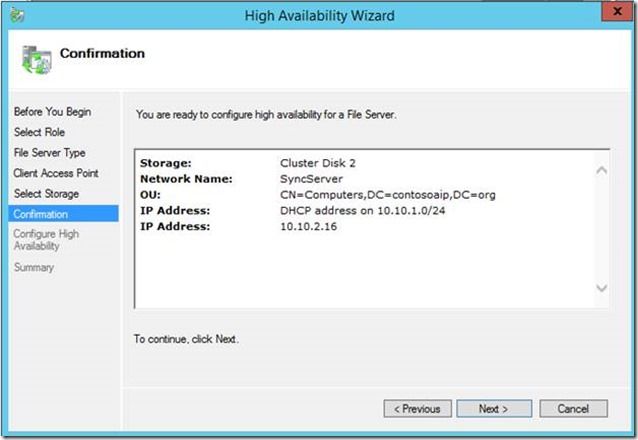 
When the File Server role is moved to another node, you may notice ESENT errors logged in the Windows application event log on the passive node. These errors are logged due to operations running on the passive node that are unable to access the Work Folders metadata and can be ignored. However, you can prevent these events from being logged by adding the Work Folders services as generic services in the cluster.

Note : Generic Services can only be added to one File Server Role. If you plan to have more than one Work Folders Sync Share in the cluster, these steps should not be performed.

To add the Work Folders services as generic services, perform the steps below:

1. Right-click on the SyncServer role and add a “Generic Service.” 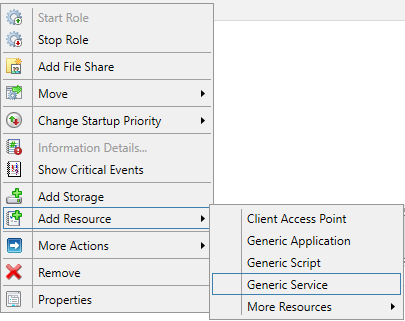 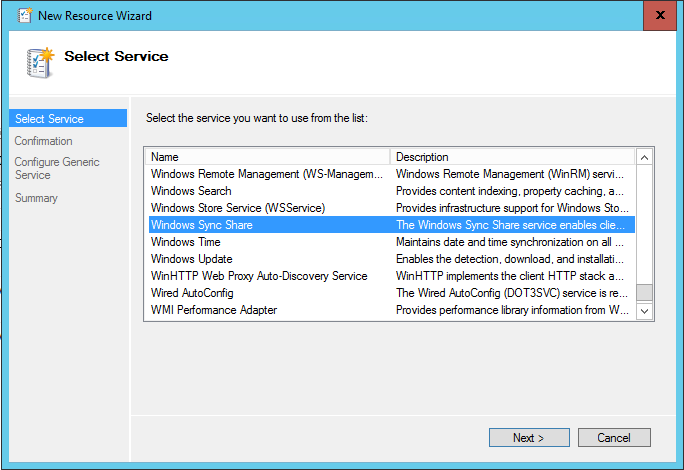 3. Repeat steps #1 and #2 for the Sync Share Token Translation Service. 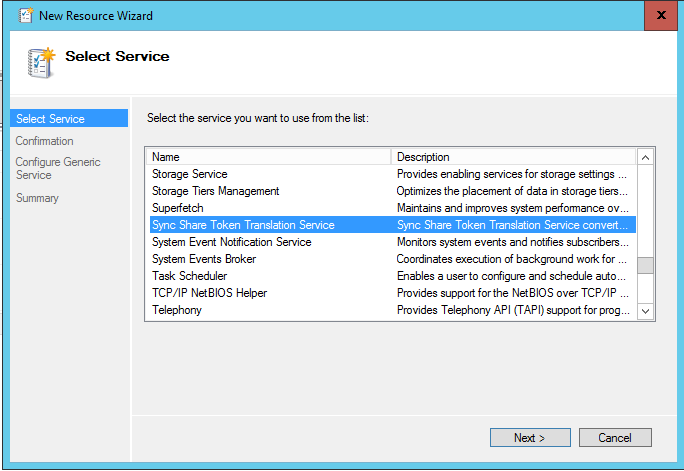 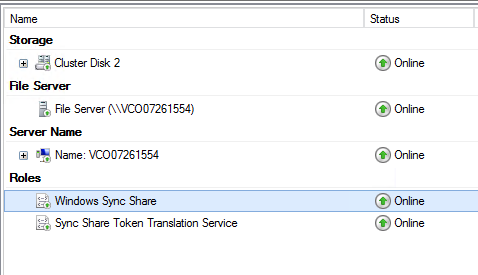 5. Now we need to configure service dependencies. Right-click on the “Windows Sync Share” service, go to Properties and then click on the “Dependencies” tab. 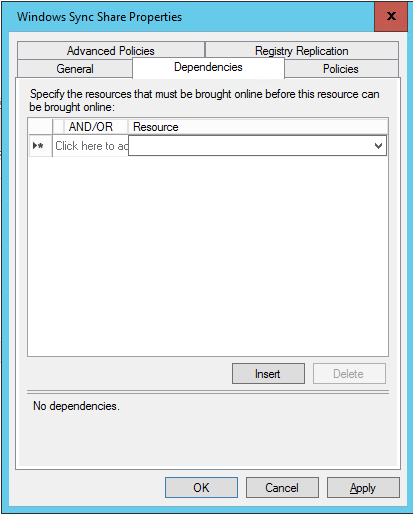 6. Insert the following dependencies from the resource drop-down and click OK. 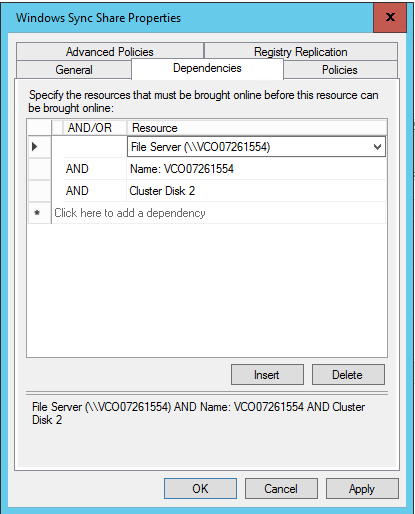 7. Repeat steps #5 and #6 for the "Sync Share Token Translation Service."

Note : These dependencies may vary based on your environment.  It’s important that all File\Disk cluster resources are Online before the Work Folders services are started.


For general certificate management, see this post. This section will focus on certificate configurations in a cluster using self-signed certificate. Note: the certificate must be configured on each of the nodes.

1. Create a self-signed certificate on one of the cluster nodes by using Windows PowerShell:

Note: the DNS name should be the name you used for the clustered file server instance (VCO) for the sync server. For multiple VCOs, the certificate must include all of the VCO names.

2. Export the certificate to a file

To export the certificate with password, you can either use certmgr.msc, or Windows PowerShell. I’ll show you the cmdlet version referenced in this page :

3. Copy, then import the certificate on the other node

Note: you can get the certificate thumbprint by running:


In a cluster, the sync share is created on the node that owns the disk resource. In other words

1. You cannot create sync shares on disks that are not shared across all the nodes.

2. You cannot create sync shares on the non-owner node of the clustered file server instance (VCO).

For example, I want to setup a sync share on disk E, which is owned by SyncNode1, I will run the following cmdlet on SyncNode1:


Most of the management experiences are the same between standalone and clustered sync servers. In this section, I’d like to list out a few differences:


Work Folders supports failover clustering configuration in Windows Server 2012 R2. Most of the management experience is similar to the standalone servers, and the management should be scoped to the clustered sync server (VCO). Certificate management however is per-node.

I hope this blog post helps you to understand how to set up a highly available Work Folders server and provides you with insight into the differences in management between a standalone and highly available configuration. If you have questions not covered here, please raise it in the comments so that I can address it with upcoming postings.
We support Ukraine and condemn war. Push Russian government to act against war. Be brave, vocal and show your support to Ukraine. Follow the latest news HERE
0 Likes
Like