any suggestion about the subject? We think to have no problem to create the backend via SharePoint or Microsoft Lists and glue all the stuff with Power Automate..but what for the front end part?

We want to create a page where our customers create the tickets and where they can consult them or add comments; I created a team site and the inserted a web part for a list and and another for the list properties..but, we want, for example, that our customer can create and edit the tickets but nothing more on the site, but it seems impossible to do this with permissions.

Also, we'd like to create a better look and feel for the list properties web part, but how to do this?

If somene has experience with Atlassian Service Manager (or Desk) maybe know how they have paginated the various pages; I have also thought to create the ticket with Microsoft Forms, maybe insert it in a web part in the site, but it seems not so, how to say, beautiful to see; I also considered to render every ticket in a web part with inside the form modfied via Power Apps, but how to procede? And, the customer must have a license?

I know that there is a possibility to do this via Power Apps Portals, but for a small company the price is not affordable.

Any suggestion is appreciated.

Re: Use SharePoint as Help Desk front end

@Marco Mangiante for the IT Ticketing System at my company I built a system that uses Forms, SharePoint, Power Automate and Power Apps-customised SharePoint forms. We've had nearly 10000 tickets submitted and resolved in the last year.

1. The user in the business submits details of their issue via Microsoft Form form from our intranet.

2. A flow in Power Automate gets that form response and saves it to a "triage" list in SharePoint and sends an email from a shared mailbox to the IT Applications Manager alerting him to the new item, with a link to it. It also sends a confirmation email back to the user with the details of what they submitted and the ID number from the triage list.

3. The IT Applications Manager opens the ticket details which are in a Power Apps customised form and routes the ticket to one of 3 teams. Another flow adds the ticket to a separate "routed" list with the team, trhe details of the problem and who submitted it and a ticket number column which is populated by the ID from the triage list - so the ticket has the same number all the way through.

4. Each of the 3 teams has their own view of the routed list. They go into it and can assign it to a specific engineer via a Power Apps customised form. In that form they can add notes and can send an email to the user (via another flow). The user can reply to this email (via another flow) which will populate a column in the list. When the engineer has resolved the issue s/he can click a button in the customised form to trigger yet another flow to close the ticket, update the status and send a final email to the user. 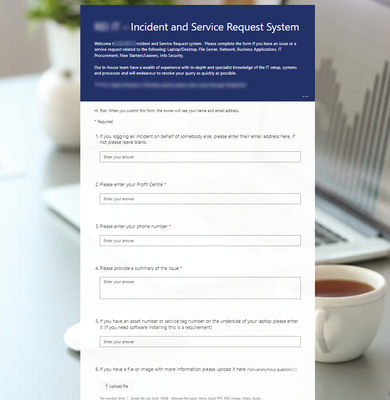 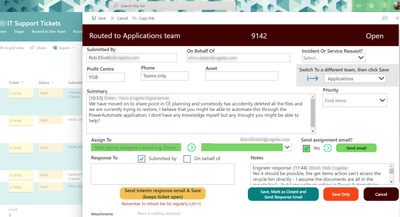 So there are several flows running and we make heavy use of shared mailboxes. But it's quite intuitive and the system has allowed us to cancel an external contract for IT Support that wasn't providing the support we wanted and they didn't have the in-depth knowledge of our systems, so it has saved real money.

Hope that's useful. Come back with any questions.

Re: Use SharePoint as Help Desk front end

first, my congratulation for this system; I thought and have an idea of a similar system, but a constraint that maybe we have is that we would like, for some of our customer, to fill the ticket independently; for these I thought to give an external access to a specific Sharepoint site or give them a company service account: in both cases however, it seems that I can't give them the only permission to create and/or update the ticket and only that, so in the site they can see and do nothing else than operate on the tickets.

I also thought to create a Microsoft Form, like you've done, to collect starting information, but after that phase I don't know how to give the external customer the possibility to see and modify the ticket.

I have also seen that there are Power Apps Portals that maybe can help to solve the front end problem for external customer, but for a small company the price is not affordable.

Any suggestion is well welcome.