This blog looks at some of the complex Networking connectivity and Security requirements of the Customers, and designs SAP on Azure Networking Solutions, that can meet those requirements.

Customer has a three environment SAP S4/HANA landscape - Development, QA (Quality) & Production, that is deployed across two Azure Regions – South Central US and East US Regions. 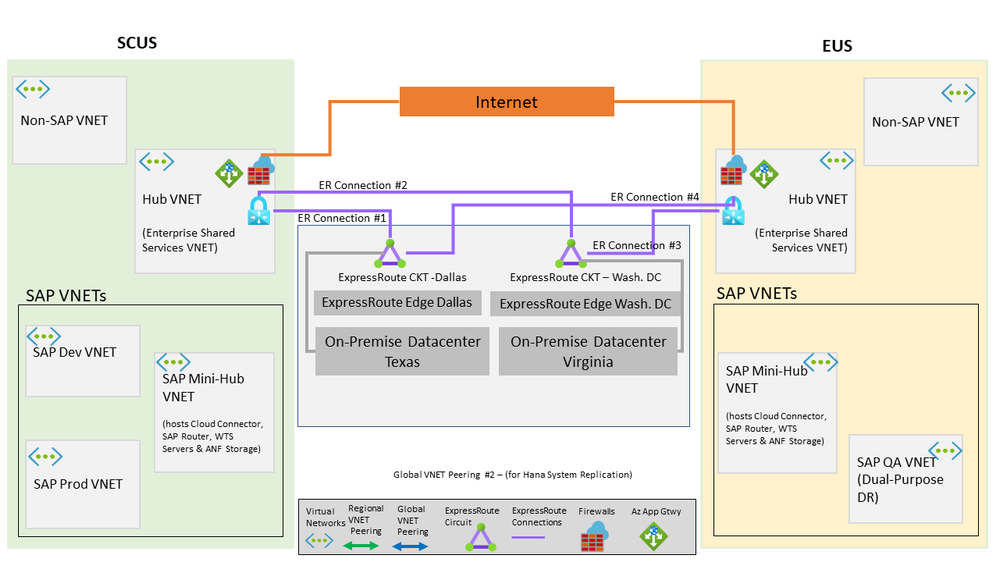 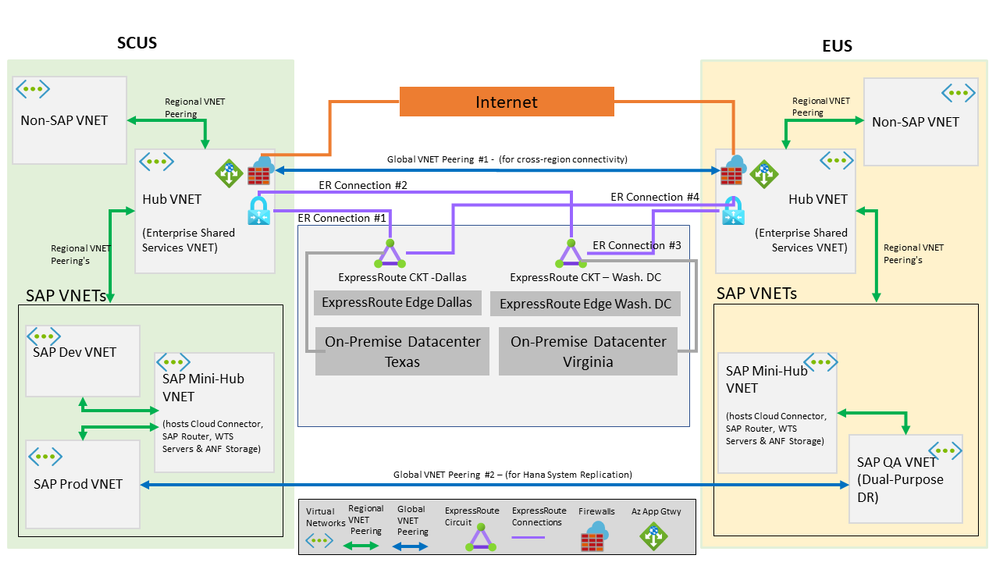 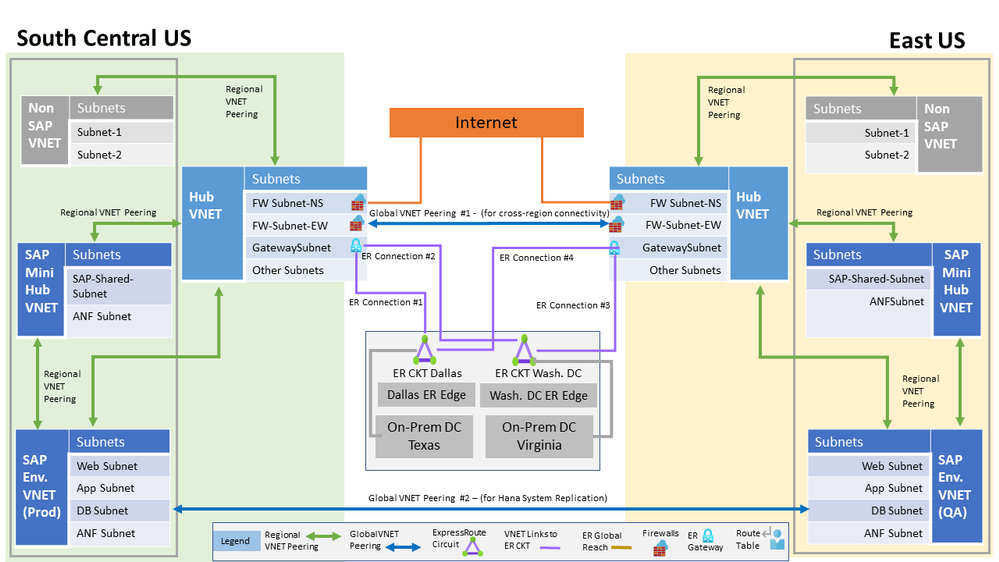 Fig 1-c is the same Architecture as in Fig 1-b, and provides each individual Virtual Network’s Subnet layout, to get a better understanding of the overall Architecture Solution.

In above Fig 1-c, the Customer has chosen to use Palo-Alto Firewall solution in Hub VNET.

They have gone with two Palo-Alto Firewall deployments

Customers can choose to use Azure Firewall instead of Palo-Alto FW, and control both North-South and East-West traffic using the same Azure Firewall. 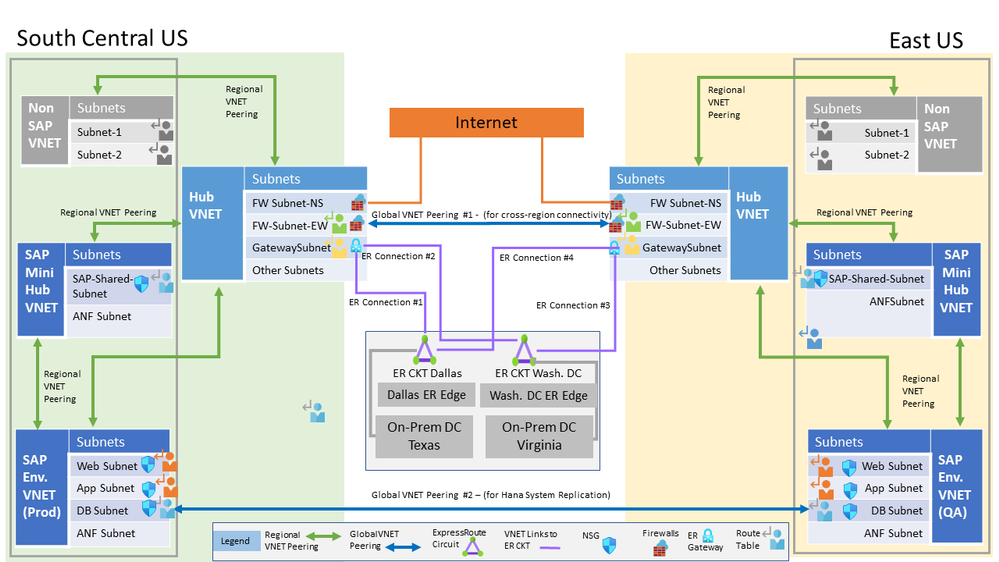 Fig 1-d is the same Architecture as in Fig 1-b and provides more guidance and understanding related to User Defined Routes (UDR’s) and Network Security Groups (NSG’s) need to implement the proposed Architecture Solution.

SAP Hana on Azure HLI is a unique solution, in that it offers the possibility to run and deploy SAP HANA on bare-metal servers that are dedicated to Customers.

The SAP HANA on Azure (Large Instances) solution builds on non-shared host/server bare-metal hardware that is assigned to Customer. The server hardware is embedded in larger stamps that contain compute/server, networking, and storage infrastructure.

As HLI’s is a BareMetal offering, they are front-ended by HLI ExpressRoute Circuit, that Customer’s VNETs can link to establish connectivity between Azure VNET and HLI Hana Databases.

This results in ExpressRoute Gateway only required to exchange routes between Virtual Networks and ExpressRoute Circuits (front-ending HLI or On-Premises Networks) and is not in the data-path between Azure VMs and HLI/On-Premises., there by greatly improving network performance. 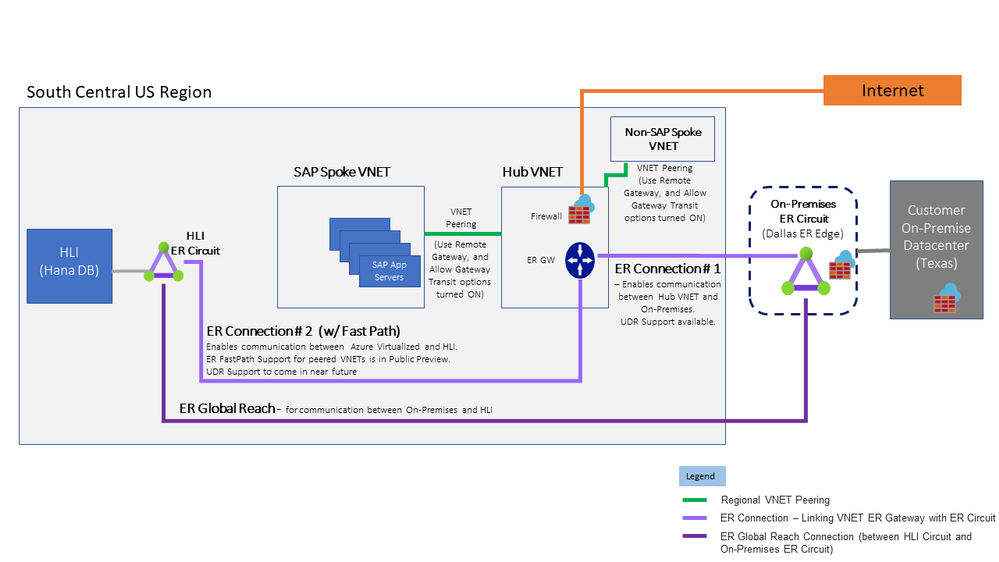 The ExpressRoute FastPath support for peered VNETs is in public preview and a key capability that is enabling the above Architecture.

Mapping HLI use-case scenarios to solution in Fig 2-a 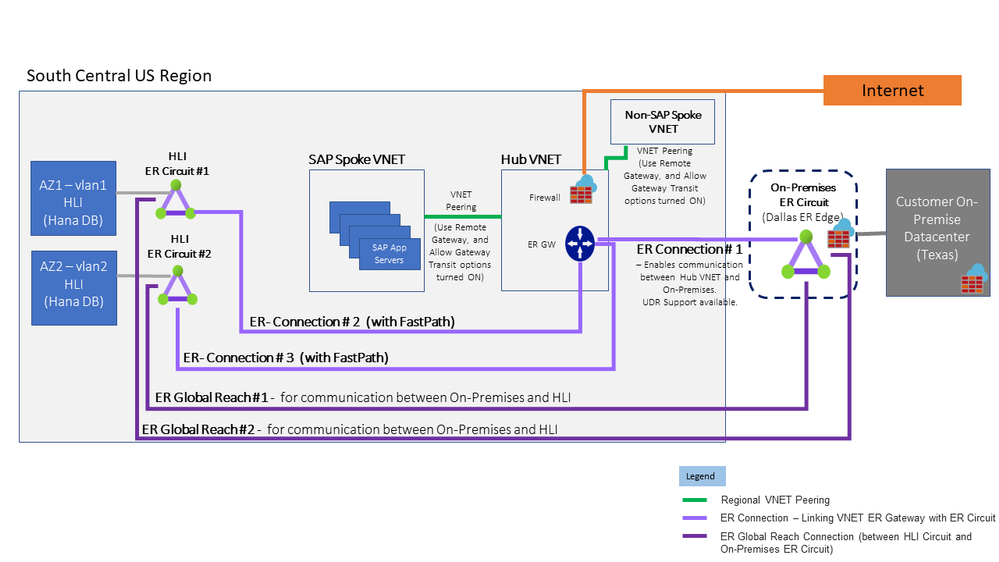 If HLI’s are setup across two Availability Zones, then please do note that they will be in two separate VLAN’s and will be front-ended by two separate HLI ExpressRoute Circuits.

Mapping HLI use-case scenarios to solution in Fig 2-b 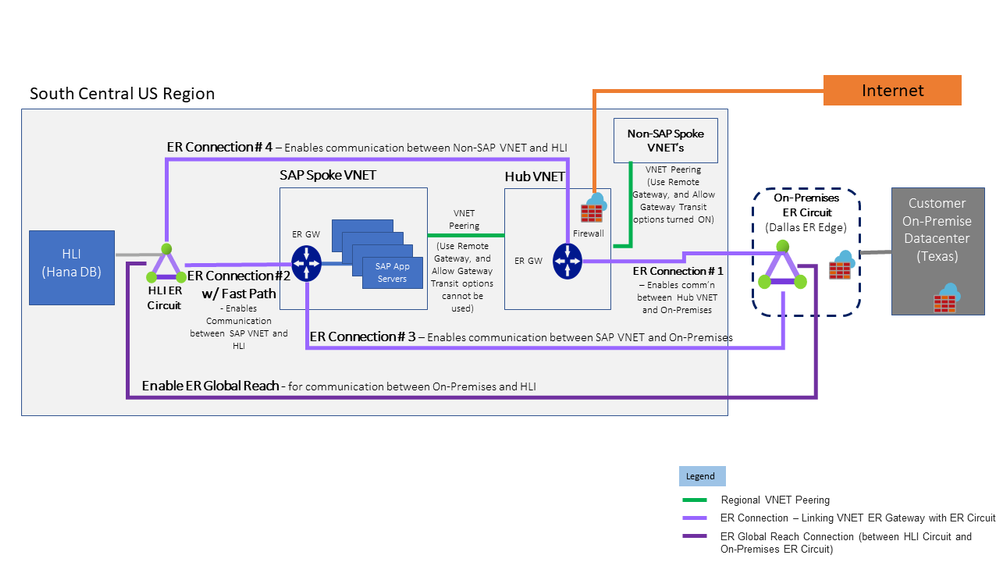 The above Solution will be useful for those Customers that are not comfortable with enabling ER Fast Path for Hub VNET ExpressRoute Gateway, as it will open up HLI to all VNETs that are peered with Hub VNET

The above solution will deploy a separate ExpressRoute Gateway in one of the SAP Spoke VNETs (eg: SAP MiniHub VNET), and setup an ExpressRoute FastPath connection (ER Connection #2 in Fig 3-a) between SAP VNET and HLI

It will also setup ExpressRoute Connection without FastPath (ER Connection #4 in Fig 3-a) between Hub VNET and HLI, to enable any non-sap VNETs that need to communicate with HLI’s.

More specific UDR’s (User Defined Routes) will need to be setup, if Customers want to route non-SAP VNETs to SAP VNets or to HLI through Firewall NVA’s, as otherwise direct connectivity will be possible.

Mapping HLI use-case scenarios to solution in Fig 3-a 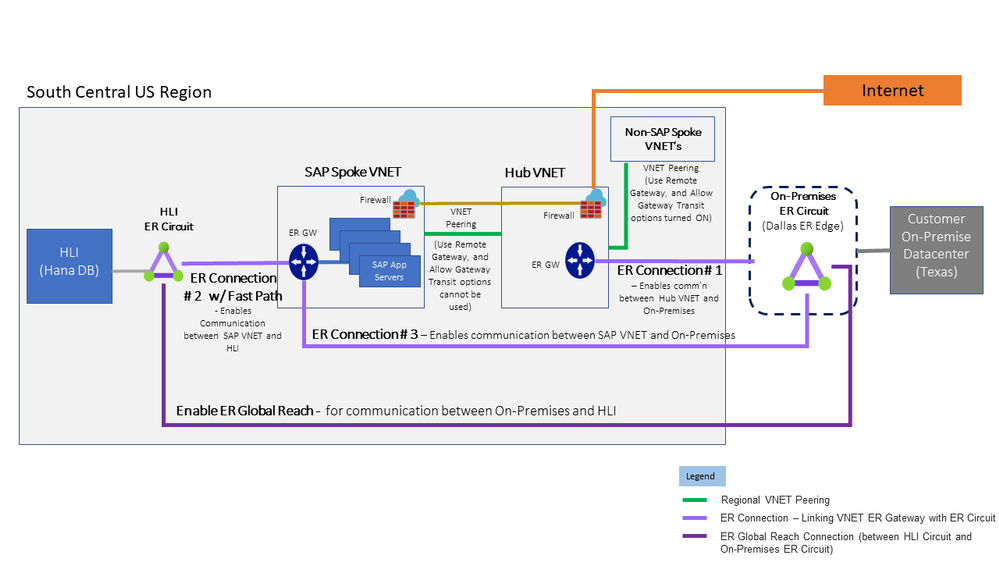 This solution can be considered if any of the above options are not feasible or acceptable to Customers.

This solution can create considerable networking complexity, as SNAT/DNAT configurations will be needed on Hub VNET and SAP VNET Firewalls, in addition to setting up many UDR’s.

Mapping HLI use-case scenarios to solution in Fig 3-b