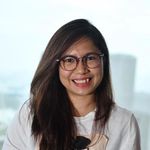 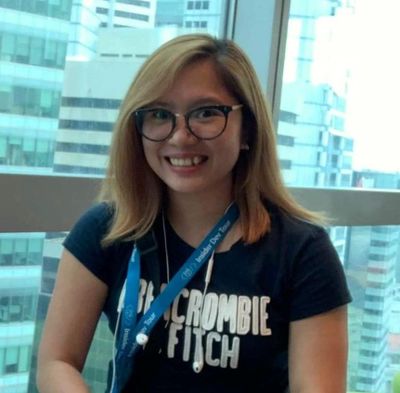 In a room with a full audience and an atmosphere full of excitement and admiration, a man drinking coffee on stage is wearing a device on his head. He kept walking around "his house" and watching a movie while a screen keeps on tagging along with him. He uses "gaze and air tap" gestures to resize the screen. After watching, he checks his calendar to see if he has a scheduled meeting for today and pins his contacts on the wall. When he demonstrates what he could do with the device on his head, a woman wearing a similar device on her head enters the stage.

She displays a corpse on the scene using the same gestures the man did earlier. By interacting with the human anatomy and studying what could be the problem in the body, she screens it out. A hologram of a snapped femur bone suddenly displays, concluding that it could help her with the body's diagnosis. After interacting with the human body anatomy using the device, her time was up. Another presenter comes up on stage, and this time, a woman enters the scene with a robot. The robot is named B15. It says "Hello" to the audience when the woman instructed it while wearing the same head-mounted device as the previous presenters and shows the pin location. This guides B15 to move accordingly. While B15 moves to the next pin, the presenter obstructs the path where B15 will move next, but it didn't stop B15 from moving. It finds a new route to get away with the obstruction, carrying on with its tasks successfully. When B15 says "Goodbye" to the audience, everyone claps with great excitement, and I, too, kept on clapping in that magic show live at home.

Oh wait, it's not a magic show!

It was the Build 2015 Keynote with Alex Kipman. As he introduced a truly magical device called "Microsoft HoloLens," I was one of the audiences at home, clapping excitedly and amazed at what I had just witnessed. A human interacting with the digital world in the real world by simply wearing the HoloLens, isn't it impressive? By wearing the device and moving your fingertips, you can easily visualize 3D objects, interacts with maps and structures, and experience virtual items being overlaid onto your real world.

When I was in college, I used to interact with 3D objects by hand using the "Right-Hand Rule" Method and draw them using the drawing tools. When using the "Right-Hand Rule," you rotate your right hand in the direction x, y, z, or merely horizontal and vertical to visualize better the objects (even your head is turning to imagine the 3D object). Now imagine making a building structure in 3D, and you simply have to use your fingers to seamlessly flip or twist objects, or rotate your head to visualize what it would look like in the real world. Imagine having to call your team member in another part of the country or even across the world, asking for help and advice to fix/inspect a machine in your factory. It will be time-consuming since you have to wait for them to book a flight and get to your location, battle jet lag and even after they've arrived, you can't easily visualize the complex piece of machinery.

However, with Dynamics 365 Remote Assist on Hololens 2, a new world has opened and the possibility is endless. Gone is the need to book flights and spend an exorbitant amount of money to have overseas experts come to your site. Now, you can call them directly via the HoloLens, and they can see exactly what you're seeing, in REAL-TIME and even draw mixed reality annotations right into your physical environment. It's hard to simply live in a 2D, paper-based environment once you've experienced the magic of mixed reality.

At the last "Future Now Conference 2018" #MicrosoftAI event I attended in Singapore, I got a chance to experience the Microsoft HoloLens 2. That experience was life-changing since I don't often indulge in buying them for development and tinkering, and it is not in my direct line of work. However, I was deeply curious and wanted to explore this fascinating piece of technology for my own learning. I knew that there are many possibilities that we could do with this technology - we're only at the tip of the iceberg of what's possible!

When I tried on the HoloLens, a thought came to my mind. I love the HoloLens, but what if you wanted to experience virtual objects in the real world but had no access to an AR wearable device? Could we make mixed reality a possibility for these people too? If you are like me and interested in mixed reality but may not have the budget to procure an expensive AR device, what are your options?

Enter Power Platform. Its fan base has been growing rapidly as it makes it super easy to create an application. Even developers or app makers can quickly build one with minimal coding required. Infusing AI with Power Platform application is as easy as a point-and-click; what about Mixed Reality? For me, I originally thought that making an application with AI would be complex to build and use simultaneously, and significantly more so if I added Mixed Reality into the equation.

Yet, Power Platform has been a great help in removing the impostor syndrome inside of me. I got to meet many people in the community and was even able to build an AI application using Power Platform quickly. I could make an app with AI and my goal back then was to make one with Mixed Reality next. My wishful desire was granted when Power Platform rapidly evolved; In April 2020, Mixed Reality technology was released as a Private Preview in Power Platform. I was so excited and thrilled about it that I immediately signed up for the private preview, and truly ecstatic that my application was accepted.

I started looking for inspiration to do some demos and business case scenarios to help the customers and the company, so I configured my development tenant to experience and try the preview of Mixed Reality in Power Apps. Even though it's not currently part of my line of work, I still had the chance to explore and enjoy it in my leisure time without sacrificing my job. I was impressed by its capabilities and possibilities with Mixed Reality in Power Apps and so excited to share it with everyone in the community. 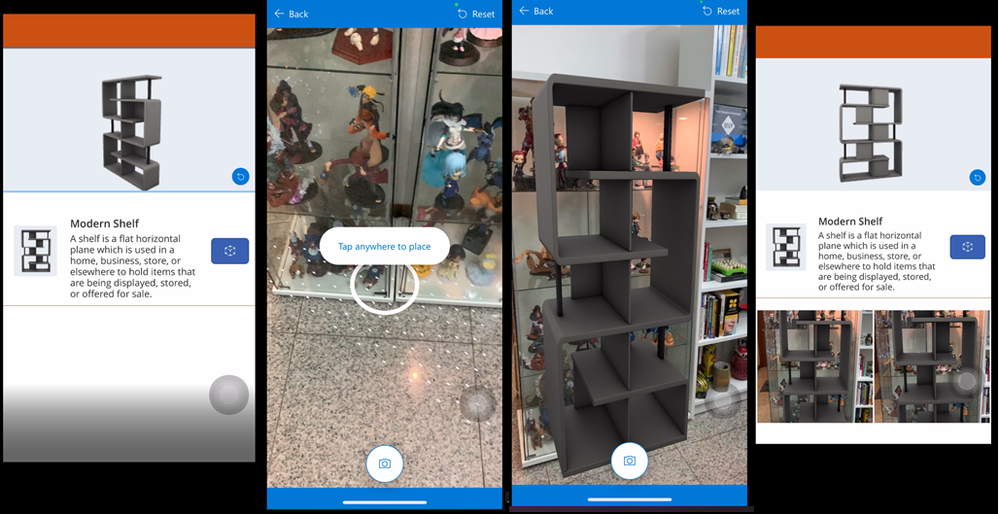 The first time I shared it with was during the ASEAN Microsoft BizApps UG Women in Tech online. I shared the same stage with Dona Sarkar, Soyoung Lee, April Dunnam, and other amazing women speakers worldwide. But it didn't end there. My speaking career with Mixed Reality in Power Apps continued until I reached Kuala Lumpur, Germany, and Paris through online speaking engagements. I get to share great things and ways of what we could do with Mixed Reality in Power Apps. 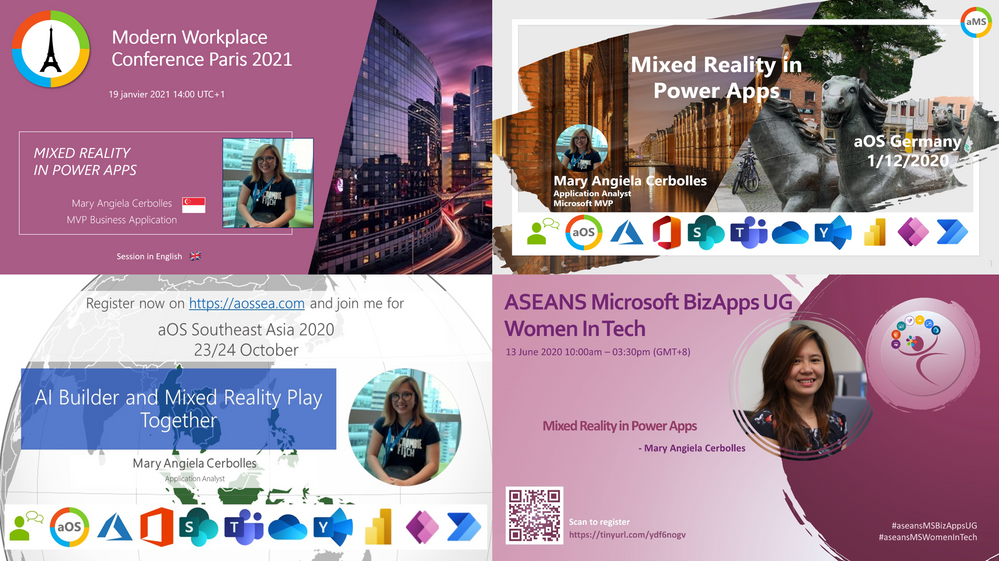 While we're still in the midst of a global pandemic where social distancing is observed, the possibility of traveling and meeting with other people is almost zero. Everything is online now. From buying products, engaging with colleagues, training, and even classes use online platforms. With Mixed Reality, we can easily view the products we order online, take measurements, and easily visualize them from our home or business area instead. Even if you can't get your hands on a Hololens, we can still make use of our phones with Mixed Reality in Power Apps. Dynamics 365 Remote Assist also works on iOS and Android mobile devices, which most of us likely already have! I highly encourage all of you to experiment with it using devices you already have, and you might just be inspired to use mixed reality in new ways as well.

There is an excellent potential for the device in life, health, and safety aspects to help you visualize objects, experience, and engage with other humans. The possibility of this technology is endless; the only limitation you have is your imagination. What will you create with mixed reality next?

Anj Cerbolles will be hosting a Table Talk on "Intro to Mixed Reality Business Applications" in the Connection Zone along with Daniel Christian and Adityo Setyonugroho at Microsoft Ignite 2021. If you are interested in this topic and want to connect with her LIVE, be sure to register for Microsoft Ignite and add their session to your schedule! Microsoft Ignite 2021 is free to attend and open to all.