Is it possible yet to enable new message notifications for all messages, not just @ mentions or private messages?

If not, when is this coming?

In addition to the alerts you receive when you are following a channel you can configure the following options. 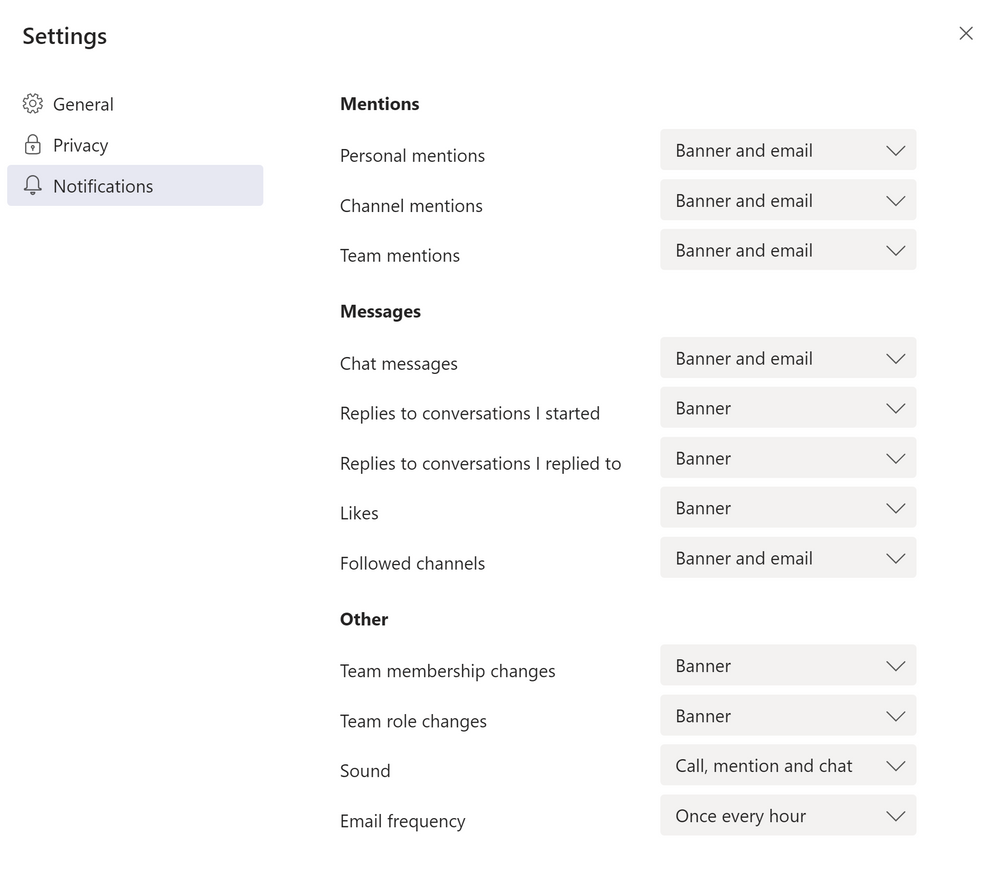 There is no blanket way to get notifications for all messages, but as Magnus says, if you favorite a channel, then you will have the option on that channel to follow it. Which will give you notifications for every post and reply regardless of mentions.
0 Likes
Reply

If I favorite a channel, are those supposed to effect the mobile app notifications too?

We have favorited and starred all channels but still..

Teams app do not have that same red dot at the top right corner of the app icon as email, txt messages, Whatsapp and so on does. It gives that red dot ONLY when user receives personal message but team channel conversations do not give that red dot.

When a user opens Teams mobile app, no channel names are bolded to indicate that the channel has new messages.. This means that user has to browse through every channel to see if there are any new messages. Some of users has gone back to Whatsapp groups because it indicates of ALL new messages at the app icon with the red dot with a number in it indicating how many new messages there are.

Is this going to change because this has major negative impact in adopting Teams!

Because you have to follow the channel after you favorite. Favoriting channels just adds it to your list and allows you to get notifications for channel mentions. Follow gives you activity feed notifications and banner alerts / the red dot for messages.
2 Likes
Reply

Hi I am having the same challenge and would like to know whether this can be applied for the general Channel.
As someone else says even when favorating a channel we still not have the red notification or the banner
1 Like
Reply

I am also in need of a solution to administratively activate email notifications for any channel messages for many users.

A separate but similar subject that would be nice is to allow us to administratively favorite or follow sites for many users, so that the sites show up in their open/save options in Office Apps.

You can go into a Team Settings and channel tab and Auto Favorite a channel for a team. But if we had it on a per user basis that would be awesome.
0 Likes
Reply

Can't you just @"team name" to get a notification to the whole team? That has seemed to work for us.
0 Likes
Reply

@Chris Webb not having this function in teams is a complete killer.

We wanted to switch from SLACK to Teams, but by simply not being able to activete auto-follow for all of our users it killed the switch from slack to teams. Unfortenuately. Hopefully they will add this feature someday.

You can force favorite channels in Teams, which will add it to everyone's favorite in the Team which will allow @channel mentions to work. But following or forcing notifications for all messages is not there and I don't necessarily agree with it being there either. Forcing a favorite should be suffice which is in the product today.
0 Likes
Reply

The only reasin we are still using slack and not teams. We will see how long microsoft will take to release this very simple feature with one slider. (Auto follow channel for alle members) - and it‘s done :)
0 Likes
Reply

Teams desktop application does not show all chat/notification messages

Bug : Teams notifications not going away despite message being opened

Bringing large groups and communities together in Teams