Syncing of channel names to folder names in SharePoint

Syncing of channel names to folder names in SharePoint

We all know (or should) that when a channel is created in a Team, a corresponding folder is created in the SharePoint site for that team with the same name as the channel. For the longest time, there was confusion because renaming a channel did not rename the folder (and - spoiler alert - still does not). Microsoft has been promising for some time to address this issue. About a year ago, they blocked the ability to directly rename a  folder in SharePoint that was linked to a channel (which was a good step, but still results in some confusion). Within the last month or so, they did roll out a change to the display of the Documents library in SharePoint to help clarify which folders were linked to channels and which were not. However, if this rollout is "complete" - it's very underwhelming and may lead to even more confusion (and help desk calls) than before the update. 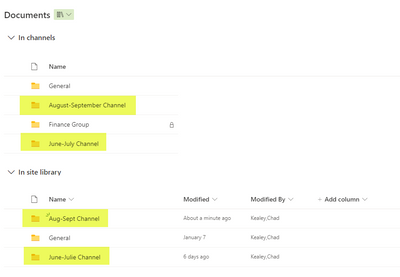 There are two issues with this:

1) Channel folders are represented twice (more on this below). When this change was announced, they gave the impression that "In site library" would only show folders in the Documents library that were not linked to a channel. Having the folders appear twice is very confusing.

2) The "new" channel name is only used in the "In channels" section. This increases confusion exponentially. IF those channel folders were not displayed under "In site library", this wouldn't be a huge deal.

Now, it's very possible that what I'm seeing now is the result of this change being partially deployed, but it's been like this in our tenant for several weeks. According to the M365 roadmap, this is still "In development", so I'm willing to give it time to complete. Are other folks seeing the same in their tenants?

Have you seen the MC post? https://admin.microsoft.com/Adminportal/Home?source=applauncher&ref=MessageCenter/:/messages/MC30666...
0 Likes
Reply

@ChristianJBergstrom yes. The fact that it's practically mid-June and SOME of the change has been implemented is already causing confusion for our users. I understand that there are a LOT of moving pieces involved, but it'd be great if Microsoft could wait for all the supporting back-end changes to be in place before changing the UI. As someone who supports and trains users on these products, this bits & pieces approach makes my job much more difficult than it needs to be. I end pretty much every training with a huge asterisk and note that "things in Microsoft 365 are subject to change at any time".

I just had the first users from my company coming to me and asking what is up with the "In Channels" view. They were utterly confused.

It just so happened to coincide with that particular department creating a new team and structure for project management across our entire company and they didn't realize the view was new, and partially wondered if they were doing something wrong. Also very confusing because some of their team had the new feature, and the rest did not.

This is very confusing Microsoft, come on, I know you can do better.
1 Like
Reply