Can someone help / guide me through the permissions a certain persona can have, using the Team network planner? Especially the ones starting with 'Conference'? 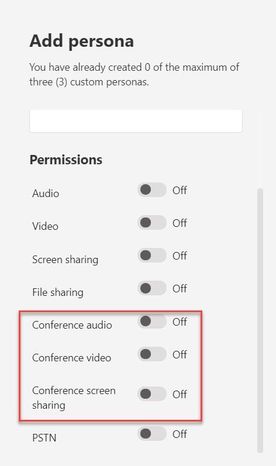 Think of the persona as a type of user in your organisation. The persona has permission to do the following - make audio calls, make video calls, screen share etc. You would create a persona of what a typical person does and then put a number against that persona (I.e. 30 users fit this persona) to work out the bandwidth required.

@Christopher Hoard, Thanks for the detailed information. Although I went through the resources but didn't find any description for the differences between e.g. Audio and Conf audio.

So what I'm looking for is the difference between:

Hope that answers your question