Turn on suggestions
Auto-suggest helps you quickly narrow down your search results by suggesting possible matches as you type.
Showing results for
Show  only  | Search instead for
Did you mean:
Microsoft Tech Community Live:  Microsoft Teams Edition
November 09, 2021, 08:00 AM - 12:00 PM (PST)
Find out more

Ignite Live Blog: BRK1066: Collaboration on the Go with the Teams Mobile App 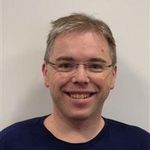 Ignite Live Blog: BRK1066: Collaboration on the Go with the Teams Mobile App

This busy session on Thursday afternoon was to review the recent progress and future for the Teams experience on mobile devices. Marissa Salazar, Product Marketing Manager, started the session by explaining the core values and mission for Teams on mobile platforms. Our mobile is the first things we look at in the morning, last thing at night. We expect to have the same capabilities on our phones as desktop, but not just a feature parity, a client that also supports mobile specific scenarios.

Marissa then handed over to Arvind Muthukrishnan, Senior Product Manager, a leader of the product development for Teams on mobile devices to walks us through the progress this year and upcoming plans for the product.

Mobile as a Productivity Device

The product group is comparing their success as a mobile app against Slack, Zoom and WhatsApp and were proud to show that they score better in the Apple and Android stores than all of these. 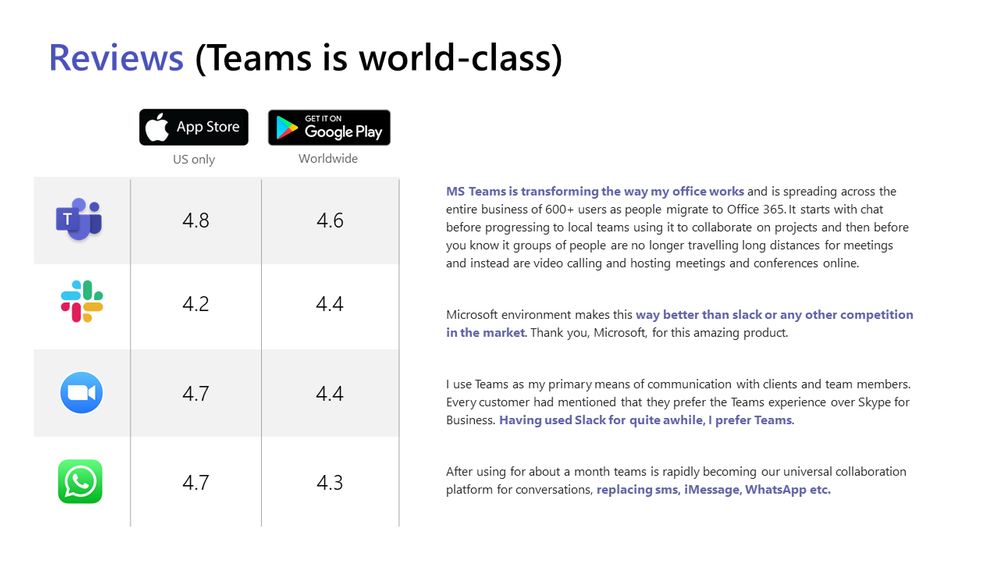 The core chat experiences work seamlessly on mobile, but there are features that either work first or best on these platforms. Location sharing is a great example, using the devices GPS to share a map to a chat, but also subtle features like allowing you to Reply to a specific message in a long chat conversation. Swiping left on a message will quote it in your new message, and once you post the quoted message acts as a link to take you back up to that part of the conversation. Swiping left on a conversation will allow you to Mute Conversation, so silencing notifications that may be distracting from a busy chat or meeting. The Smart Camera allow photos to be edited and annotations to be added and posted into a conversation.

The channel conversation experience is no different, mobile supports all the latest Teams features like Pinned Channels (swipe right on a channel in your list to pin it) and as of now includes full support to view, create and manage Private Channels in the client.

We looked at the mobile Search experience, which is a fantastic fast way to locate people, messages, or files when on the go.

Lots of work has gone into the management of Multiple Accounts in the Teams app. You can switch almost instantly as a guest in multiple different tenants, or even as a completely different user account. The data security is very important and wasn’t simple to fix, but each tenant and account is compartmentalised in a secure way.  Arvind announced that they are working on delivering Notifications across Multiple Accounts, this will allow you to be notified or receive calls when switched across to a different organisation.

Quiet Hours allows the Teams app to schedule time periods where you don’t want to be notified independently of your device’s own controls. Further work is coming in this area to link it in with things like out-of-office and to protect our all-important work-life balance.

Mobile as a Meeting Device

You can join a Teams meeting from within the Teams App, Outlook App or your devices own calendar. Remember to look for a the … menu when in a meeting as there are very many useful features that there just wasn’t room for on the screen. Sharing a PowerPoint has a smart file picker. First it shows you the last 25 used PowerPoint files, or find another file in OneDrive or within Teams files. Presenting from your phone works so well others might not believe you are using your phone.

We had a first demo of Background Blur on iOS which will come in Q1 2020, and other features like background replacement will come later. As soon a meeting starts with it’s first attendee you’ll get a notice on your mobile, one click to join or if you long press you can tell them you are Running Late with a message into the meetings chat. 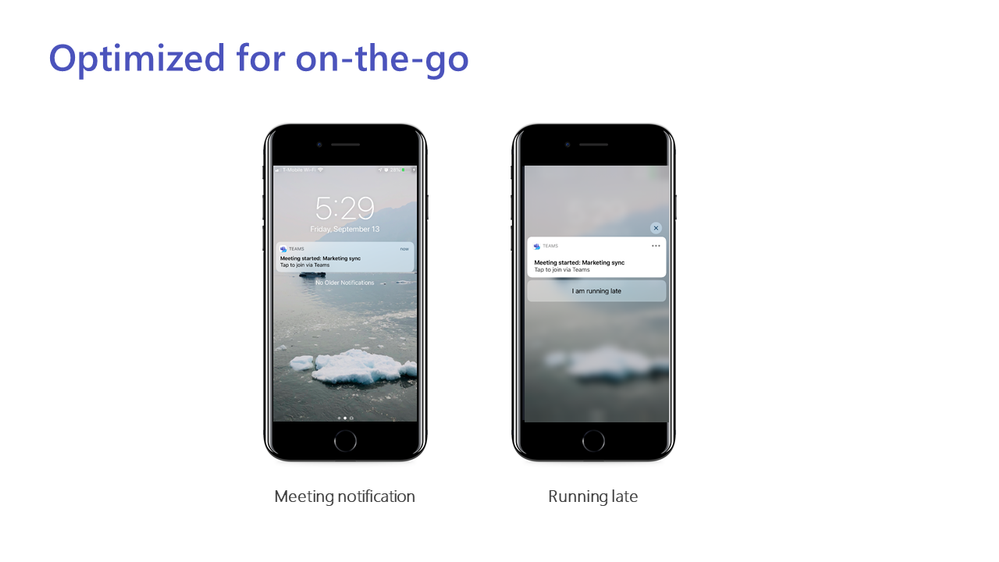 Users with PSTN features can have the meeting Call Me, handy when about to start a car journey and you need the reliability of a regular call. It now will find the right number to reach you on from your directory.

Mobile as a Platform

It is not enough to be a calling and messaging app, to be the primary tool in a workspace Teams needs to enable people to work in custom applications. The Teams pledge to be the Hub for Teamwork isn’t limited to the desktop apps, it applies equally to mobile apps.

At Ignite Team has announced that mobile now support custom Channel Tabs, by building your tab interface using a responsive framework means it will now be able to adjust and work well in the mobile app. The Developer Preview feature on mobile is available under Settings > About will now give early access to Personal Apps on mobile, a soon to be released feature, and you can now Debug on Mobile with Android to set breakpoints, view logs etc.

Organisations can control use Application Policies the applications that appear for their users, but individuals can also manipulate the order and preference of their personal applications within the drawer that slides up from the bottom bar in the Teams App.

Introduced at Ignite were Messaging Extensions, including the out-of-the-box capabilities for Surveys and Polls. These allow a rich user experience to create special cards, for example a whole form for people to complete, or a rich in-conversation poll which will track responses with a neat feature to Send a Reminder to people who haven’t yet voted.

It’s important that the applications aren’t just functional, but perform reliably on users device, a key element that is considered is the battery utilisation. Testing showed that background use of Teams creates a low impact, even receiving thousands of notifications an hour only made a difference of a couple of hours battery life on a modern device. However putting the applications in the foreground made a huge difference, halving the battery life.

This lead to the development of Dark Theme for Teams on mobile, on an OLED display like the recent iPhone X and flagship Android devices it can have a massive effect, 10 hours of additional battery life. 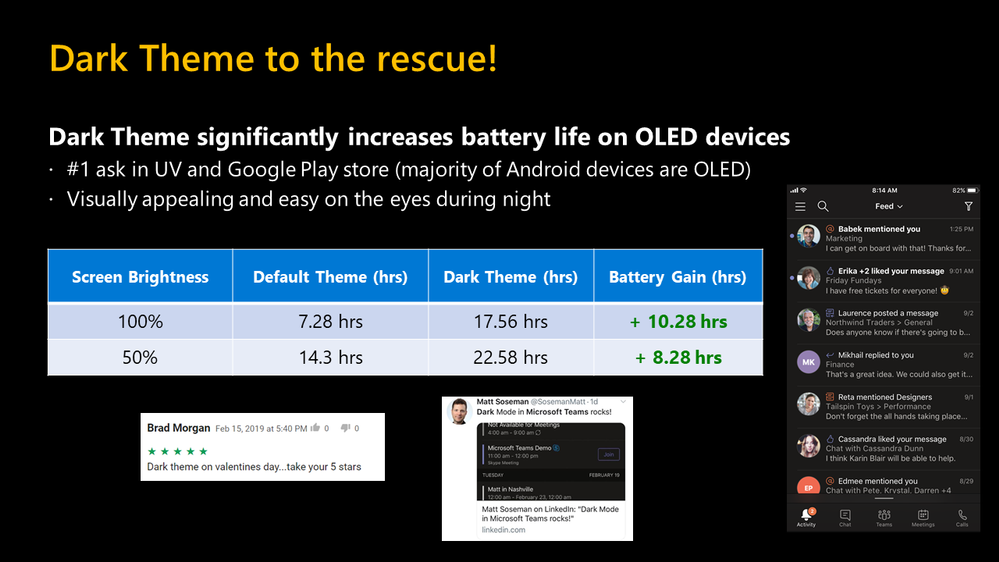 Offline Capabilities have been improved, allowing browse and search of content, sending and retries for chat and channel messages. It also keeps people aware, so for example if you re-joined a previous guest network but haven’t accepted their terms of use the Teams app will tell you that you aren’t connected (while your phone often just shows a wifi signal).

Losing connectivity while moving on a call or meeting may give you a Poor Network for a period, the app detects this and offers to reduce bandwidth or even call you back using a standard call. All of the standard messaging processes e.g. @mentioning, adding media and gifs all work really well on even inflight Wifi, which Arvind demonstrated.

Teams Mobile as the Only Device

First Line Workers generally use mobile as their only device, and it’s a major focus for Microsoft. At Ignite they have introduced new abilities for managers to manage the accounts of staff within their store with Delegated User Management.

In some first line environment staff share company devices, so having a reliable way to Single Sign Out access multiple apps is a key feature and is now in private preview for release in 2020.

By introducing Sign-in using Phone Number Microsoft aim to remove the burden from first line staff to remember usernames and passwords that they might not use anywhere else. As they sign in using their mobile number they will see a list of all the organisations that their have been registered with, then a 6 digit code is sent as a text message. 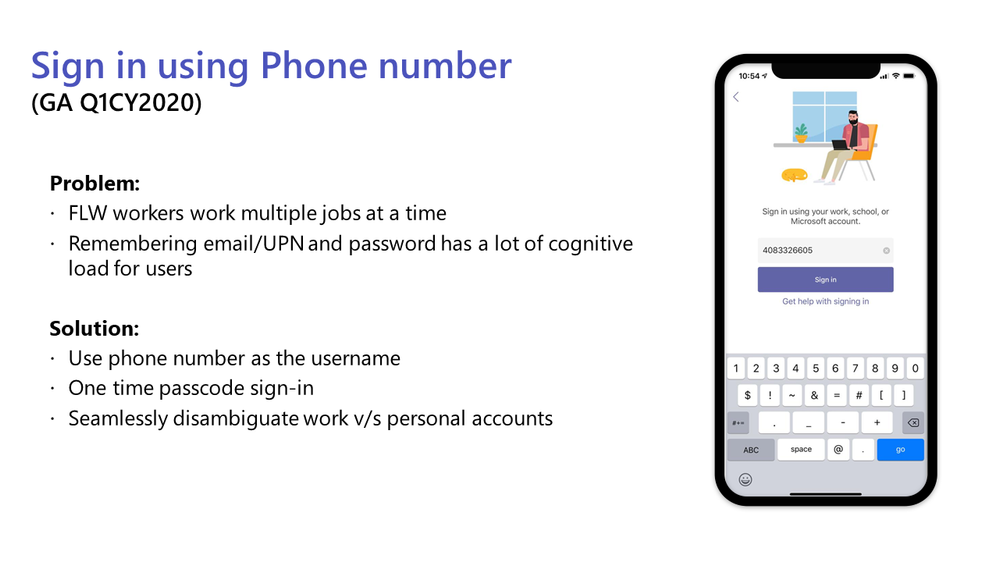 It was announced earlier in 2019 that Kaizala features would be incorporated into Teams, and development is now well underway. A core element of this is to establish an open directory that removes some of the complexity that the current guest access introduces.

Frictionless Onboarding should mean that anyone can participate in org-related chats but just being added to a group and Universal Reach will mean that people can communicate with anyone on Teams, within or outside and application. To an organisation all of the conversation related to their organisation remain within their control. Message Extensions will continue to grow into a framework to allow actionable cards to be part of all conversations.

Into the second half of 2020 the Team expect to move on to delivering exciting sounding capabilities such as Hierarchical Groups and Hub-Spoke Groups.

Ignite session are a great opportunity to hear about products from the people that are actually building them, your blog author as a Teams MVP who specializes in this area even learnt a few new tricks that I had missed in the app. I’m looking forward to see the continued development of this awesome mobile experience.

The open directory for Teams sounds great and could solve many problems (like chats with guest members...)