New Blog Post | How to use Azure Sentinel for Incident Response, Orchestration and Automation

New Blog Post | How to use Azure Sentinel for Incident Response, Orchestration and Automation 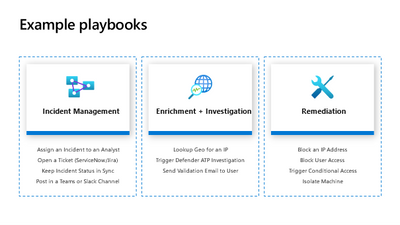 How to use Azure Sentinel for Incident Response, Orchestration and Automation - Microsoft Tech Commu...

Security teams are often burdened with a growing number and complexity of security incidents. A Security Orchestration, Automation and Response (SOAR) solution offers a path to handling the long series of repetitive tasks involved in incident triage, investigation and response, letting analysts focus on the most important incidents and allowing SOCs to achieve more with the resources they have.

Azure Sentinel, in addition to being a Security Information and Event Management (SIEM) system, is also a platform for Security Orchestration, Automation, and Response (SOAR). One of its primary purposes is to automate any recurring and predictable enrichment, response, and remediation tasks that are the responsibility of your Security Operations Center and personnel (SOC/SecOps), freeing up time and resources for more in-depth investigation of, and hunting for, advanced threats.

Automation takes a few different forms in Azure Sentinel, from automation rules that centrally manage the automation of incident handling and response, to playbooks that run predetermined sequences of actions to provide powerful and flexible advanced automation to your threat response tasks.