Microsoft is pleased to announce the draft release of the recommended security configuration baseline settings for the next version of Microsoft Edge based on Chromium, version 79. Please evaluate this proposed baseline and send us your feedback through the Baselines Discussion site.

Like all our baseline packages, the downloadable draft baseline package (attached to this blog post) includes importable GPOs, a script to apply the GPOs to local policy, a script to import the GPOs into Active Directory Group Policy, and all the recommended settings in spreadsheet form, as Policy Analyzer rules, and as GP Reports. It also includes a spreadsheet showing the changes in the available GPO settings between versions 78 and 79.

As with our current Windows and Office security baselines, our recommendations for Microsoft Edge configuration follow a streamlined and efficient approach to baseline definition when compared with the baselines we published before Windows 10. The foundation of that approach is essentially this:

(For further explanation, see the “Why aren’t we enforcing more defaults?” section in this blog post.)

@Aaron Margosis, Is there a security baseline for Microsoft Edge in Intune?

@Jeffrey Allen Yes, there is. Go to the new Endpoint Manager Admin Center (this is an easier UI for Intune) then click Endpoint Security --> Security Baselines --> Microsoft Edge Baseline. Then proceed as usual: Create a policy, apply the baseline (modify settings if needed) and assign users/devices.

@Dom Cote, thanks!  I'll take a look at that today!

@Dom Cote, I looked at the Security Baseline for Edge in Intune and after I made the policy changes and hit saved.  It erred and when I click to find out, I got nothing and it diverted back so basically this policy or baseline is useless.

Interesting. It worked for me. Although I just applied the defaults tbh. Do the defaults work for you? Which settings did you change?

@Dom Cote, I am uploading a screenshot of my settings, I believe.  I tried 5 times and so think this was the settings I wanted but wouldn't save. 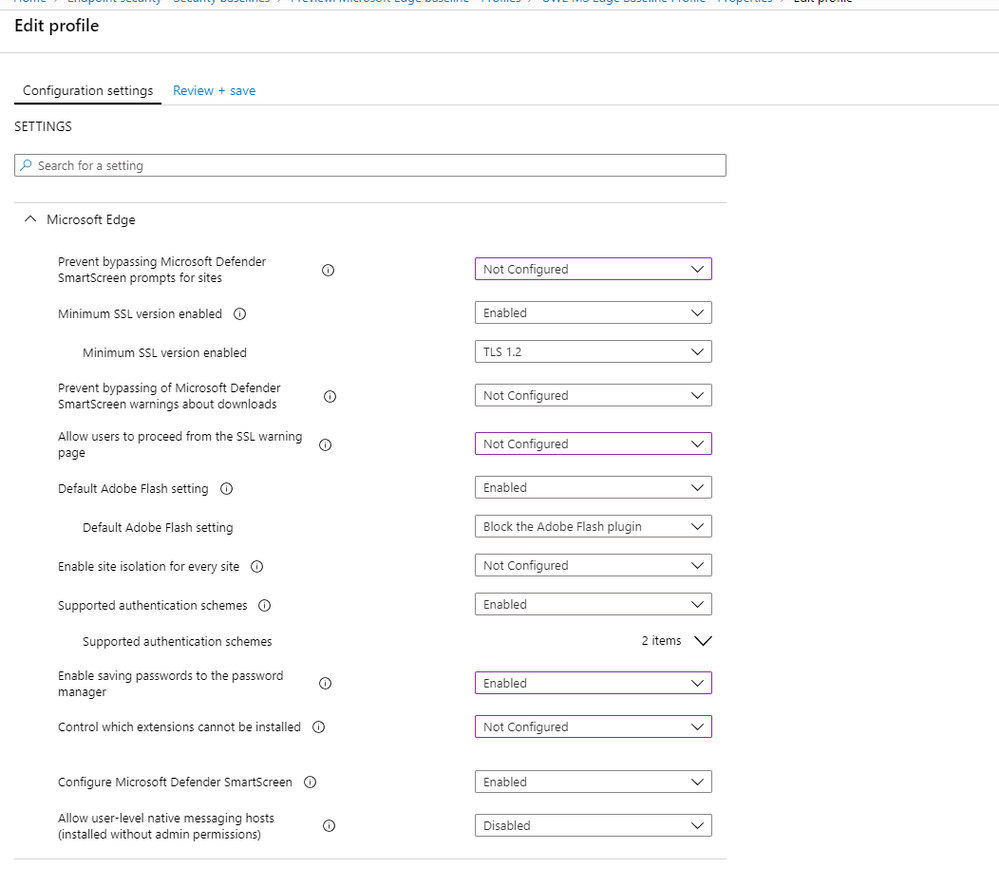 Confirmed - You're right. It's the "Control which extensions cannot be installed" setting that breaks the policy when it's changed from the default of "Enabled". Seems like a bug to me. @Aaron Margosis Can you comment on this?

Slightly OT: It looks like you're weakening a few key settings, such as being allowed to bypass SmartScreen. Obviously, we can't recommend that. ;)

Thanks @Dom Cote  and @Aaron Margosis!  I also understand the not recommending any changes regarding SmartScreen and I may change them back.