Turn on suggestions
Auto-suggest helps you quickly narrow down your search results by suggesting possible matches as you type.
Showing results for
Show  only  | Search instead for
Did you mean:
In Technology, There is Art
By

In Technology, There is Art

This month, The MVP Blog is shining a spotlight on some of the MVP community’s developer-focused initiatives around the world.

AI MVP Charles Elwood, both artist and engineer, is keen on combining the worlds of technology and art.

Charles has been working on two big creative projects: A project for ArtPrize and the so-called ASL recognition project at the Rotary Club.

In his most recent art project, Charles decided to blend AI, ballet, and chalk art forms and enter one of the most significant art shows in the world – ArtPrize. The ABBy project is an interactive and educational work of art. The art piece interprets body language and emotion to transform, recognize and translate ballet steps into digital feelings.

The project was exhibited at the ArtPrize in Grand Rapids, Michigan. ArtPrize is an open, independently organized international art competition with over half a million visitors and $500,000 in prize money.

The installation formed a chalkboard with the open-ended question: "What would you use this for?"

Visitors were asked to write down problems that could be solved using AI. During festival weekends, Charles was on hand to add another interactive element to the third stage, where visitors could create their own AI-recognized pose or sign that represented an emotion or feeling.

“I learned a lot about storytelling and how to tell a story that evokes emotion in others. At station one of the Art Prize, I inspired curiosity and humor; at station two, goosebumps and awe; at station three, body movement, participation, and pride. People walked away with tears in their eyes – or smiles,” Charles explained.

But combining the two worlds of technology and art requires some additional skills. Charles also did another project using Azure IoT Hub and Azure Percept to see if it could be trained to recognize American Sign Language (ASL). He then worked with the Rotary Club of San Juan, Puerto Rico, to use Azure Percept, Stream Analytics, and PowerBI to develop a custom AI sign language for someone who can't speak or sign properly.

“Two days before the exhibit opening, I had streamed four Percepts through a wifi hotspot at the hotel. The hotspot was overloaded, and I had a 10-15 minute delay in the webstream. We called the hotel IT support team, and they brought a large network switch and Ethernet cables. We hardwired the four devices and turned off the wifi – and voila! Life was good again!” he said with a laugh.

Charles wants to show the world what AI can do for audiences other than traditional developers – sharing AI with business people (Rotary) or art lovers (ArtPrize participants) and demonstrating to them what they can do with it.

The artist hopes his installations will help people understand AI and how it can be used to express emotions and solve problems. In addition, Charles also plans to take AI submissions and suggestions from visitors to discover more problems AI can solve.

Read this article for more. 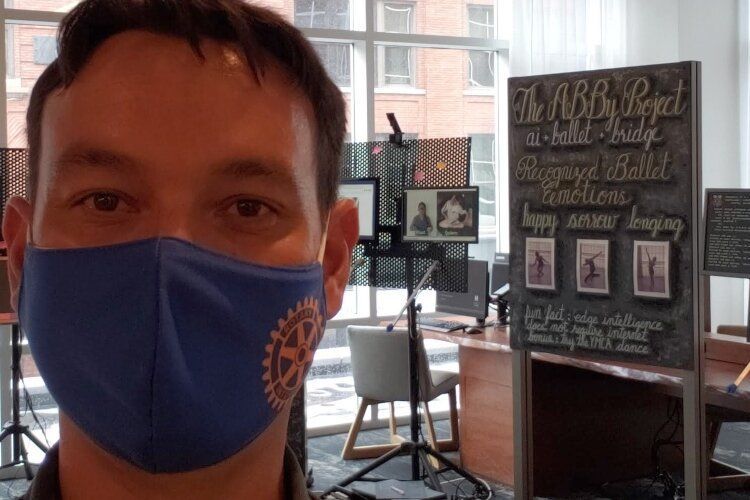