Turn on suggestions
Auto-suggest helps you quickly narrow down your search results by suggesting possible matches as you type.
Showing results for
Show  only  | Search instead for
Did you mean:
Can we make data engineering CI/CD more like code? (Yes we can!)
By

Can we make data engineering CI/CD more like code? (Yes we can!)

As a CTO, your organization has a development team, they use GitHub or Azure DevOps (or any tool) for new releases, bug fixes, testing. Yet another team is working closely with the development team, the data engineering team. However, you cannot achieve an aligned approach for software development. The data team lead struggles, your DevOps team are trying, but still, they need to perform manual fixes to any new Synapse workspace.

The suggested development process when using Synapse calls for the following steps:

Data engineering teams are requested to align to other teams with their software life cycle approach. Using tools for automatic creation and refreshing of Synapse workspace. However, even if they can reach a stage where the linked services are parameterized, there could be additional areas where parameters are required. For example, when a SQL script is pointing to a specific storage account, container, or dates, and these needs to be specific for an environment, or when a Spark notebook needs to read from specific location which is again environment specific.

Synapse does not provide (for now) the ability to inject parameters per user requirement, nor does it allow for global parameters to be used. This results in the need for an operational team to make manual changes after deployment. Changes include providing specific values, making changes to SQL notebooks and potentially other assets.

The notion we can tap into the deployment process, leverage the ARM template parameter concept. The deployment task will read the two files generated by the 'Publish' step, right? This is what we covered earlier, but let's challenge this approach. What if we can somehow modify the generated template and use our own parameter file? Will this allow us to inject parameters?

Then I also modified the parameter file and added this new parameter.

Using the Azure DevOps task to populate this value during deployment.

Which resulted in these values to be part of my provisioned workspace, hurray!

This taught me that we can tap into the deployment process.

You're probably saying -  Hey show me the automation! You changed from going manual to full manual, right? Wrong.

How? It's time for automation

The ability to replace parameters exists, now its time for how to do it. I wrote these two user stories to help me focus on the solution:

The problem has two main aspects to resolve. The first aspect is, how can we inject parameters to the auto generated ARM template file? The second part is how to create a dynamic parameter file and use it in Azure DevOps.

The first is rather simple to acomplish and this is due to the way the ARM template uses SQL or notebook code, it copies the content to a single JSON attribute, so if one would write in their SQL script

It would appear in the generated file. Quick and easy. Yes it isn't the most elegant solution - but it works and it is super simple.

Note, the reason I think it is a valid approach, is that you cannot save real passwords, nor SAS tokens in your GitHub repo anyway, so a step to remove these values before commiting will ensure these secrests will not be part of your repo.

Let's talk about the second part:

For the parameter automation, @yherziger  suggested we use a custom GitHub action, that would be triggered by a push to the published branch, scan the ARM template file, create an array of parameters by searching for the parameter(', then verify all of them exist in the generated file. If not, add the missing parameters and write it to another parameter file, commit it to the same branch. During testing we found out:

And for the last part of the solution, the Azure DevOps release. I used a CI pipeline since it can filter specific folders as its trigger. I pointed it to the newly created folder and file /injected_params/. 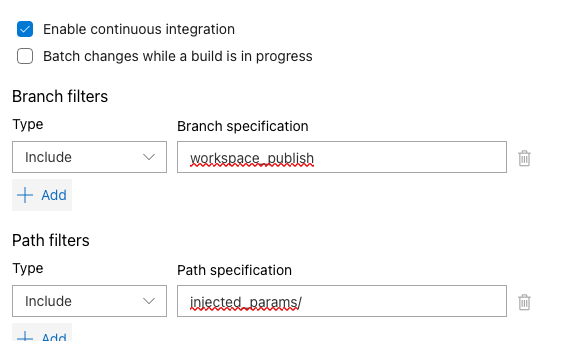 The pipeline only creates an artifact for the release phase, and this is what it looks like: 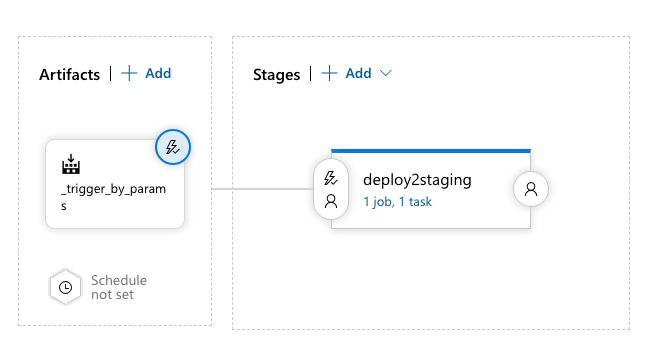 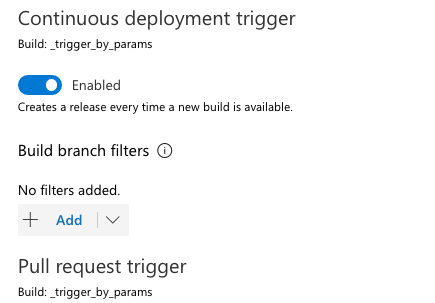 The trigger for the first step is stright forward: 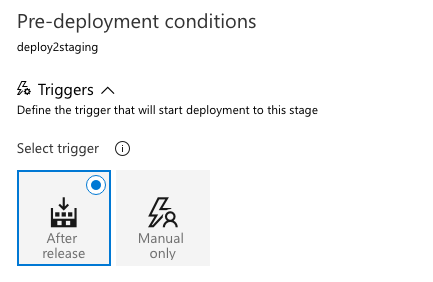 The configuration of the Synapse task was reviewed earlier. When configured be sure to execute at least once the CI pipeline, so you can have a reference to what the artifact would look like.

Secrets manegment in Azure DevOps - you should refer to this document for further details.

The sample exists in Azure Samples.