I have previously used kiosk mode, both "Digital/Interactive Signage" and "Public-Browsing" with the old Edge, without problems.

Then I created a new Kiosk machine, based on Edge Chromium, an "Digital/Interactive Signage". It works well, except for it will always ask to set over the page from Norwegian to English! The page is a room plan for the building, updated regularly  at: TP: Timeplan (uio.no) 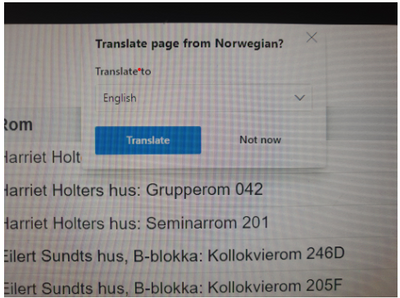 It's impossible to get rid of this message, it's popping up all the time.

If I choose "Not now", it's forgotten next time the page is reloaded.

If I accept Edge to set over from Norwegian to English, it does so, but the choice is forgotten next time the webpage is reloaded.

I also tried to set over from Norwegian to Norwegian, but at next refresh the choice was forgotten.

I have set up two computers with this kiosk configuration, one in Active Directory, one stand-alone, same result

Even if translation is disabled, in kiosk mode Edge is still asking for translating page !
Very annoying.

Glad to hear I am not the only one experiencing this. And yes, very annoying, this destroys a very good kiosk solution.
0 Likes
Reply

I found a way to disable it add this option to command line : --disable-features=Translate

Where do you put this command line in ?

Unfortunately if you use Assigned Access I think you cannot put extra options.

But if you use shell:startup and a shortcut to run edge in the target of the shortcut you can put :

I found out of that

But i found also this article:
https://www.tenforums.com/tutorials/159502-turn-off-offer-translate-pages-microsoft-edge-chromium.ht...

Yes, modifying the Policies-key in registry is normally done with a Group Policy, and is a OK workaround! Still, I hope the Edge team could fix this bug.
0 Likes
Reply

Thank you so much it works even in assigned access. Cool !
0 Likes
Reply