Turn on suggestions
Auto-suggest helps you quickly narrow down your search results by suggesting possible matches as you type.
Showing results for
Show  only  | Search instead for
Did you mean:
Windows PowerShell Profiles Processing Illustrated
By

Hello everyone! My name is Preston K. Parsard (Platforms PFE) here again this time for a procedural review of PowerShell profiles. Now I realize that this topic is already well documented and in fact, have included some great references at the end of this post, where you can find more information. What I can offer here in addition to these sources is an illustrated step-by-step approach to explain how PowerShell profiles are loaded, processed and even relate to each other.

Profiles can be used to establish a baseline set of features provided by references to variables, modules, aliases, functions and even PowerShell drives. Profiles can also enable a common set of experiences like colors for the various host on a system that will be shared among different engineers, like Dana and Tim in our upcoming scenario who will use the same development server. With these configurations, all users will have access to these resources and experiences by the time their individual user/host profile loads. In addition, individual profiles can be customized to each specific logged-on users own perferences. Even if a user or team of engineers need to log on to multiple systems, such as servers or workstations, they can still leverage a common set of resources by employing remote profiles hosted on a file share.

Hosts Hosts in this context refers to the PowerShell engine used such as the PowerShell console or the Integrated Scripting Environment (ISE), not the computer as in local host . While there are other hosts that can be used for PowerShell, such as Visual Studio Code and Visual Studio 2017, among others, we will focus our discussion only on the native Windows PowerShell console and ISE engines and acknowledge that the process is similar in concept for all hosts, with the exception for where certain host profiles reside on the file system and how the host specific themes, apearance and layout for each host can be modified with profile settings.

Execution Scripts cannot be executed using the default PowerShell execution policy, which is restricted, and since profiles are implemented as PowerShell scripts, this execution policy will have to be changed to allow script execution so that the profile scripts will run. You will also require administrative access in order to change the execution policy on a system.

SCENARIO Adatum, a fictitous regional manufacturing company of 100 employees, has a team of Windows systems engineers who have recently been tasked with building their PowerShell script library. This repository will host new and existing scripts to automate routine tasks for the the Windows server team. We will examine the PowerShell profile processing experience for one of the senior members of this team – Dana who will use login alias usr.g1.s1 and is a member of the local adminsitrators group on that machine. Dana will be logging on to the development domain of dev.adatum.com . There is also a usr.g2.s2 alias for the other engineer, Tim, but it will not be used for the demos however. In this scenario, we will use screenshots after Dana logs on to the Windows Server 2016 development server named AZRDEV1001. 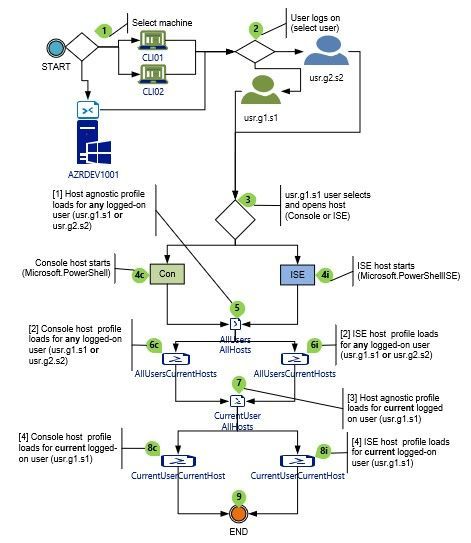 Figure 19: Profile Loading Sequence and Relationships Now that we've covered the details, let's sumarize by reviewing the simpler Venn diagram in Figure 19 above to focus on just the profile loading sequence and their relationship to each host. [1] We'll start at item 5 which shows that for either the console or the ISE host, the AllUsersAllHosts profile at $PsHome\Profile.ps1 will load. Note in the diagram how this step is shared between both the console and the ISE since it appears in the intersection of both circles. [2] If the console host was launched, then at 6c the AllUsersCurrentHost , located at $PsHome\Microsoft.PowerShell_profile.ps1 is pulled in to console session. [2] If however the ISE was opened, even if the console was already opened, then 6i indicates that AllUsersCurrentHost will load. Although it has the same name as in 6c , it is specific for the ISE host, so the path directory will be identical, but the file will differ to reflect that it is associated with the ISE and not the console. This is represented by the full profile path of: $PsHome\Microsoft.PowerShell ISE _profile.ps1 [3] In step 7 , which is another profile shared between hosts, CurrentUserAllHosts with the path value of $Home\[My] Documents\WindowsPowerShell\Profile.ps1 will be dot sourced into the loading session of either the console or the ISE, or even both if both are opened. [4] For the console host, step 8c represents the CurrentUserCurrentHost profile, pointing to the path $Home\[My] Documents\WindowsPowerShell\Microsoft.PowerShell_profile.ps1 . [4] So it's no surpise that in 8i , although using the same profile name as 8c – CurrentUserCurrentHost . This profile actually points to $Home\[My] Documents\WindowsPowerShell\Microsoft.PowerShell ISE _profile.ps1 , because now we're importing an ISE host specific profile instead of the console version.

Figure 20: Profile patterns Lets see if we can finally identify some common patterns to reinforce this review. Notice that in Figure 20, whenever there is an All host refence as in sequences 1 and 3, the profile script name will be Profile.ps1 , otherwise the script name is represented as …<hostid>_profile.ps1 which is host dependent and uses the current host, such as for the AllUsersCurrentHost and CurrentUserCurrentHost profiles. Whenever we see a CurrentUser part of a profile name, it will be specific to the currently logged on user and therefore the full path to that users profile must begin with their user home directory at $Home. For example $Home will resolve to C:\Users\usr.g1.s1 for Dana and C:\Users\usr.g2.s2 for Tim if Tim were to log on and initialize his profile. Shared Profiles Now what if Dana and Tim both need to log into various systems in dev.adatum.com, but for convenience wanted to use the same set of shared scripts, functions, modules, variables and sourced form a single, common PowerShell profile? Dana decides to configure this profile since she knows that she can dot source a shared profile script in any of thier CurrentUser… profiles (for either Dana or Tim), for each machine profile scripts by adding a line using the following syntax: . //<server>/<share>/<SharedProfileScript.ps1> First, she creates the remote \\azrweb1001\profiles share and sets the modify permissions to allow the group to which Tim and she belong – GS-AutomationTeam access to the shared profile. Dana then creates the profile on the network file share and edits it as shown in figure 22 below. 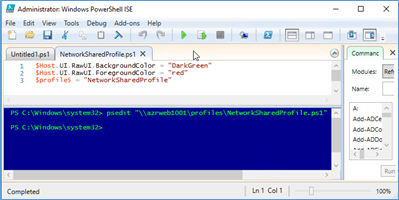 Figure 22: Creating a remote shared profile. Next, Dana dot sources the remote profile as shown below in line 3. 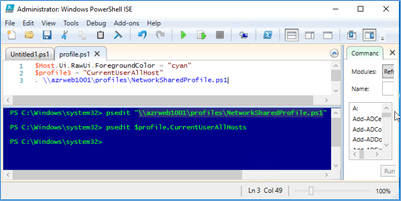 Figure 23: Dot sourcing a remote profile in an existing profile for CurrentUserAllHosts. Since the execution policy was originally set to RemoteSigned on AZRDEV1001, PowerShell will perceive network shares as remote locations and will insist that any scripts on the shares must be signed. Therefore, Dana must add the server on which the share resides to the local intranet zone in her browser advanced options. 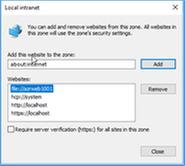 Figure 25: Adding a server with shares to the local intranet zone. Now when Dana open any hosts on AZRDEV1001, she sees that the remote profile will be loaded. 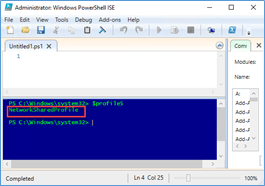 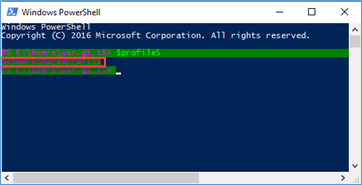 See the pattern now? Well that's it for now friends. I hope that you have a better understanding of how profiles are loaded and relate to each other. If it hasn't sunk in immediately, just keep this post as a handy reference and rely on the visual cues from the diagrams and table as a quick guide. If you do this often enough, plus use the references listed below, your comprehension of PowerShell profiles will continue to grow. Happy scripting! REFERENCES