If you’re in charge of creating or maintaining the infrastructure or security of a large and complex Azure network environment, comprised of many virtual networks (VNets), Network Security Groups (NSGs), and virtual machines (VMs) spread across several Azure regions and subscriptions, some of these questions could sound familiar to you:

These questions are common to larger enterprises and reflect common use cases we see from customers.

Well, have no fear! There’s a new kid in town, designed to solve all these use cases (and more) — Azure Virtual Network Manager (AVNM).

In this article, we will introduce Azure Virtual Network Manager at a high level, giving you an overview of its capabilities and show you where to go for more information.

What is Azure Virtual Network Manager?

Azure Virtual Network Manager is a highly scalable and highly available network management solution that lets you manage virtual network connectivity and network security rules. Currently, AVNM supports connectivity and security admin configuration features. AVNM allows you to group, configure, deploy, and manage virtual networks at scale across your subscriptions and Azure regions. Network managers can be scoped at any level (or multiple! See below.) of your management group or subscription hierarchy as long as you have the network contributor role, and all child virtual networks “downstream” can be managed from a single pane of glass.

Below, if you select the scope for your AVNM to be only management group A, then the VNets under subscriptions D, E, and F (which are ultimately encapsulated within management group A) are all visible to that network manager. 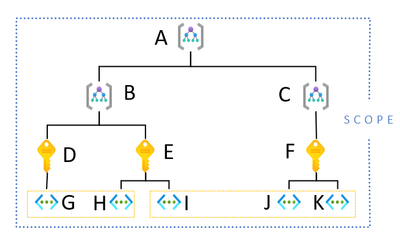 Additionally, you can create multiple AVNMs – as long as two AVNMs do not have the exact same scope and feature combination, they can coexist and the configurations of these AVNMs will be overlayed. The reason why AVNM has this design is because this ensures that VNets would know which AVNM’s configuration would prevail when there is a conflict.

For example, referencing the diagram above, you can have one AVNM scoped to management group A for corporate-wide enforcement; and another AVNM scoped to management group C for business- or environment-specific security or connectivity purposes. These two AVNMs can be used by two different teams. When there is a conflict between the security admin configurations from different AVNMs, the configuration from the AVNM with a higher-level scope will prevail. We’ll cover more details on configurations later.

The logic illustrated in the three scenarios below is that these AVNMs cannot have the exact the same combination of the scope and feature.

The operative concept here is where the AVNM is “scoped”, the management group(s) and/or subscription(s) visible to AVNM control. In Example 4 below, a parent management group also has both a connection and security configuration applied. Since AVNM #1 and AVNM #2 do not have the exact the same combination of the scope and feature, you can create these two AVNMs. When there are conflicting security admin rules from AVNM #1 and AVNM #2, the security admin rules from AVNM #1 prevail over the conflicting rules of AVNM #2 because the scope of AVNM #1 is at a higher hierarchy level. 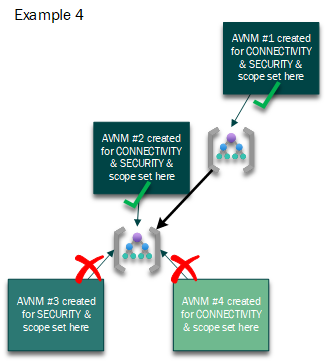 As a new Azure product, AVNM has the standard bevy of features you’d expect, such as:

We’ll go through the bits in some detail, further on, but here’s the network manager creation GUI through the Azure Portal: 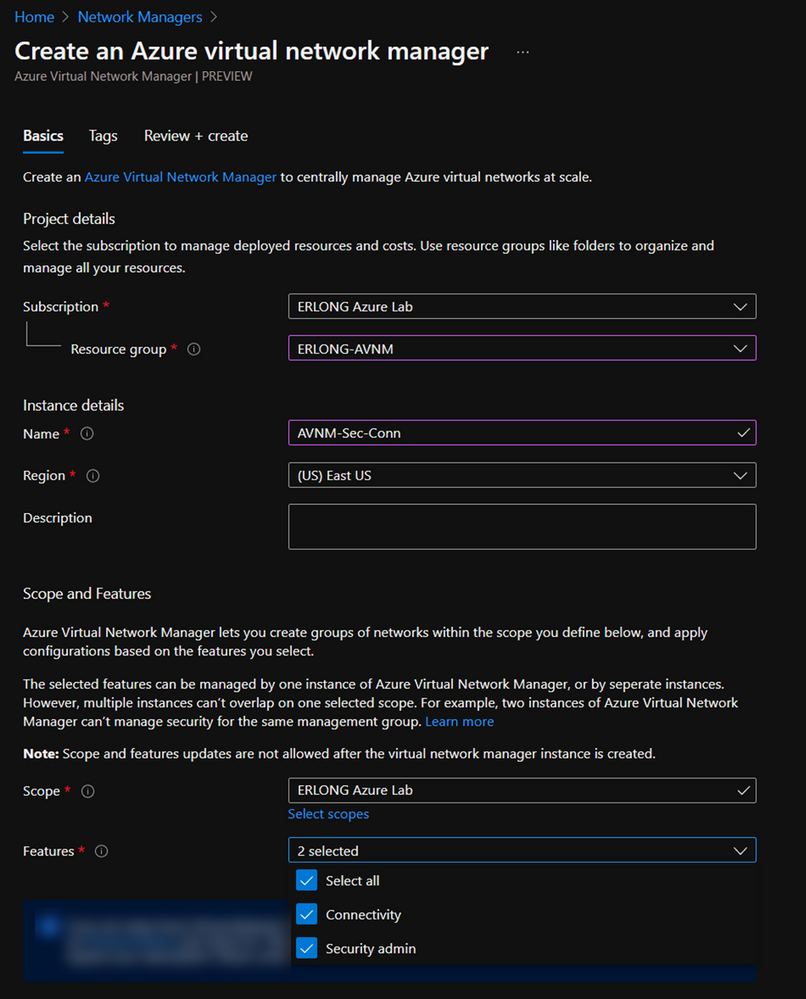 So, What Can AVNM Do?

Let’s take a closer look at how AVNM works. There are four main pieces of AVNM:

These components added together make the magic happen.

Let’s look at the last three of these in more detail.

While the network manager itself can be scoped at management groups and subscriptions, there needs to be an explicit definition of which of the VNets in that scope will be impacted. Like, are we talking all of your VNets? Only those for your test environment? Only those for a line of business? Those hosting servers with sensitive information? The ability to define multiple, very specific network groups allows for configurations to be applied very high up in the governance infrastructure yet be very granular on which VNets it impacts.

Network groups define which VNets in the network manager scope are going to be governed. This is a logical grouping, so you have complete control of network group membership by:

For example, a network group with dynamic membership can include all VNets starting with the word “Prod” in their name, or any VNet belonging to a particular line of business’ resource group. Multiple criteria can be added together to get very fine control of which VNets are included in the network group. You can also create your dynamic membership definition using JSON syntax. See here for details.

In the graphic below, we see a simple management group structure, with two child management groups, and three subscriptions distributed under those, containing a combined total of five VNets.

Let’s look at some of the interactions you can perform:

For example, an AVNM created and scoped at the highest management group will have all VNets in the entire enterprise as potential candidates. However, in this example, since a network group in the AVNM has a dynamic membership definition that limits the VNets to those with “Test” in the name, only those across the enterprise that match are actually subject to the AVNM configurations. 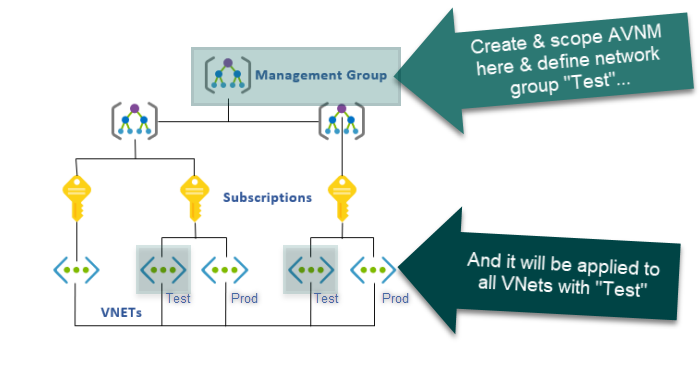 To take things a step further, as mentioned above, multiple AVNMs could be created by two teams, with one created for the enterprise-wide scope, and another scoped for a specific line of business or other purpose. As a simple example, you could create two network managers: one with the scope of the top-level management group to be used by the central governance team and would have the ability to apply configurations enterprise-wide (AVNM1 in the image below). Another one could be scoped to a subordinate management group or subscription, and would be used by a product team wishing to apply product-specific security admin rules en masse (AVNM2 in the image below).

The result is a robust mechanism that lets you make complex security scenarios that have the minimum controls deployed enterprise-wide by a central team and allow subordinate lines of business, projects, or other entities able to add their own configurations via separate network managers. 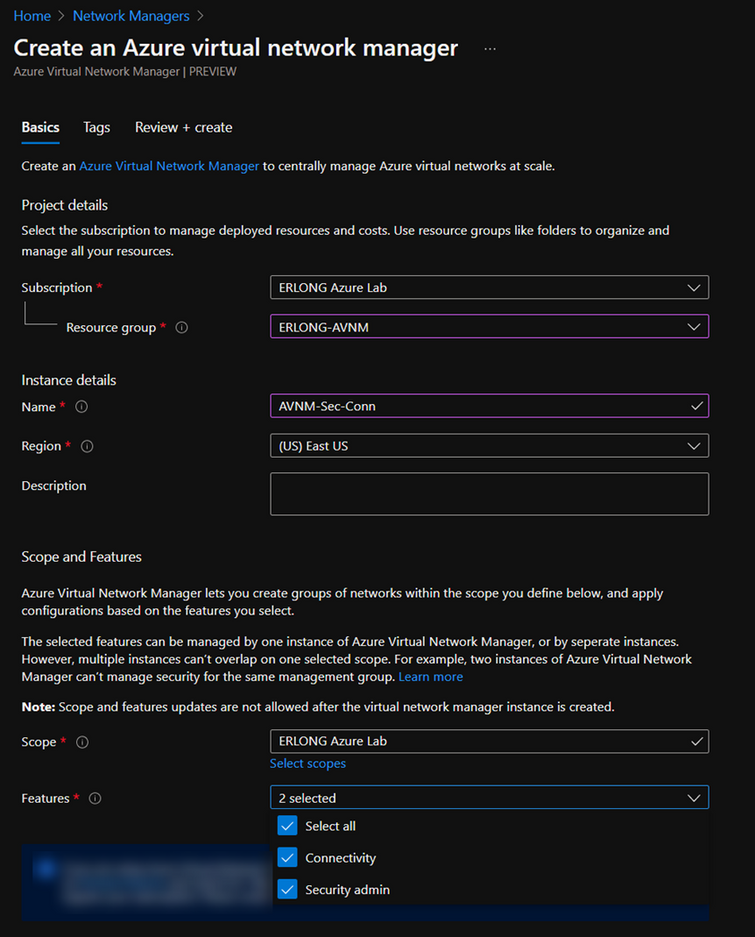 A connectivity configuration is a simple construct that defines the type of network topology to be configured on your VNets, and the network groups on which to apply it.

Let’s look in more detail at the two variants: 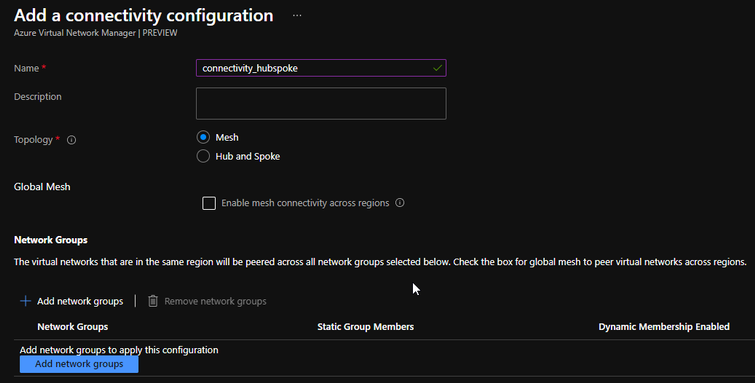 Note that the direct connectivity created between spoke VNets would be displayed as “ConnectedGroup” in your effective routes. The connections between the hub and the spokes would be peerings. See here for more details. 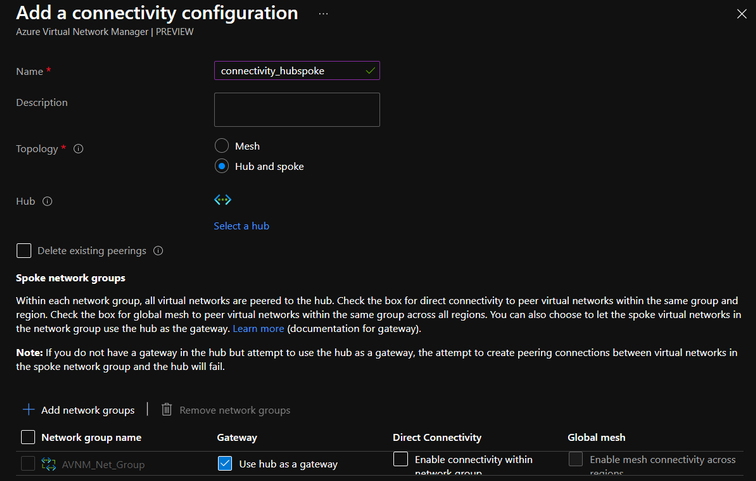 Using these settings together, you can create a hub and spoke topology where some VNets can have direct connectivity within the network group, like “Prod” below, and some, like “Test”, only have connectivity to the hub from each spoke VNet. The colored area below shows the VNets that are part of a ConnectedGroup, which in this case are the Prod VNets, since direct connectivity was enabled for the Prod network group. All the Prod and Test VNets are connected to the hub VNet through peering. 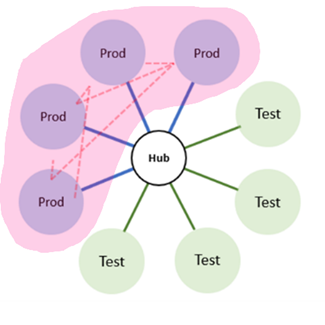 Prior to the connectivity configuration of AVNM, your main option for connectivity between VNets was to manually peer them together. This involves setting the network peering relationship up on each side of the pair, and it quickly becomes an administrative burden as the number of VNets increased (for example, in the case of the mesh topology, 10 VNets would require 10*9/2=45 peerings; 500 VNets=124,750 peerings). It can be programmatically controlled, true, but as the number of VNets scales into the tens and hundreds, it can quickly become unmanageable, let alone if you need to alter the topology.

Using a connectivity configuration with dynamic network group membership can greatly reduce this burden and make it a simple matter to connect a multitude of VNets together.

Now let’s have a look at what AVNM does to control security. This is done using security admin configurations, which include network traffic rules grouped into rule collections that are then applied to one or more network groups. 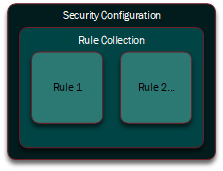 These security admin rules are exactly what you’d expect from something like NSGs or a firewall—you select a priority, direction, action, source, and destination network parameters. However, in addition to Allow or Deny, there’s a third option to Always Allow. The traffic that meets the Always Allow rule would be allowed without getting evaluated by NSG rules or lower priority security admin rules. You can use Always Allow to force of the traffic to be allowed. 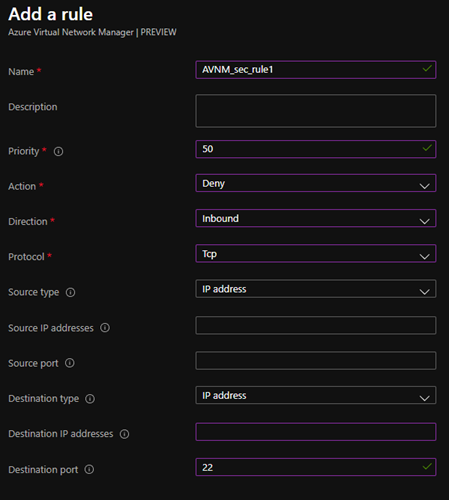 Here are several AVNM use cases for security rules:

Along with the introduction of the Azure Virtual Network Manager product itself, other areas of Azure have been enhanced to give you full visibility of the impact your network managers are having. 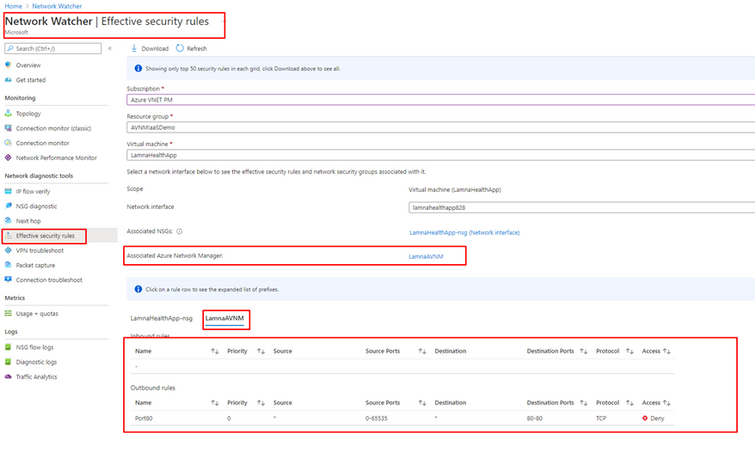 The IP flow modelling available through Network Watcher’s IP flow verify blade has also been enhanced to factor in AVNM’s security admin rules. The name of the AVNM security admin rule is displayed in the results, like “Port80” in this example. 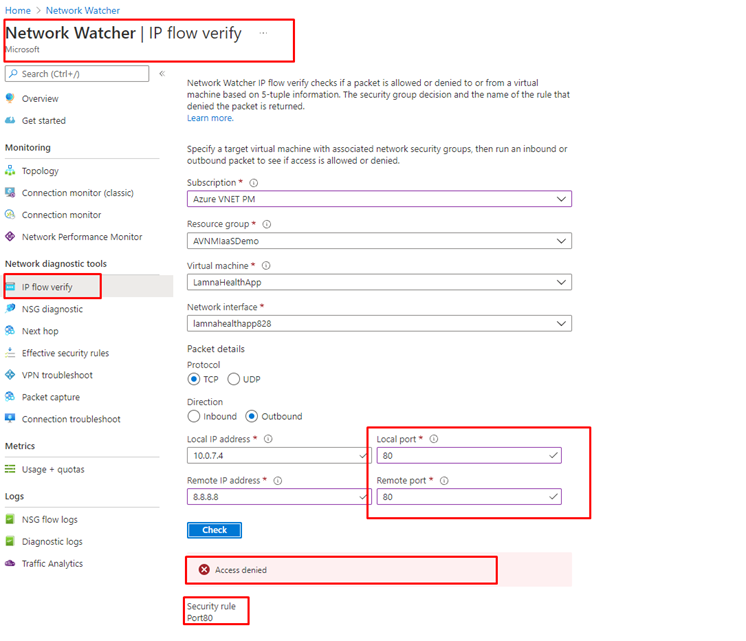 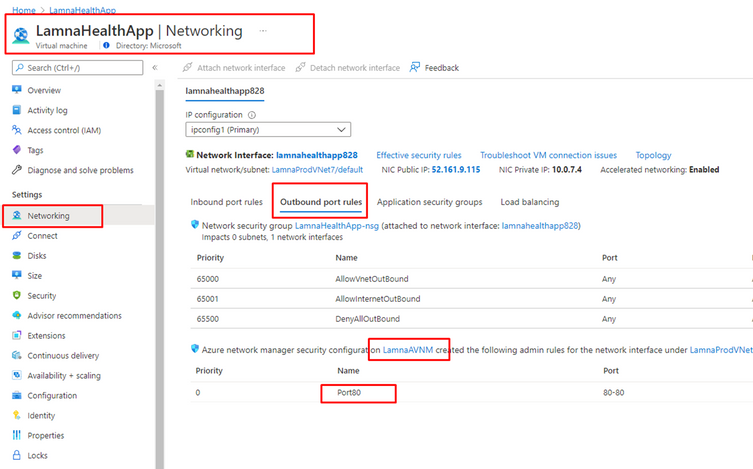 By extension, the Virtual Machine blade’s Networking section will also bubble up this information, allowing you to clearly differentiate NSG vs. AVNM security admin rules.

So up to this point, we’ve covered the building blocks of AVNM that control what is to be configured by connectivity/security admin configurations and network groups. The final piece is deployment.

Here’s a high-level flowchart of creating an AVNM and putting it into place:

We’ve covered the first three up to this point. Now, let’s drill down a bit into step 4. A deployment rolls out configuration(s) (connectivity or security admin) to one or more Azure regions.

For the final step of implementing AVNM, we will: 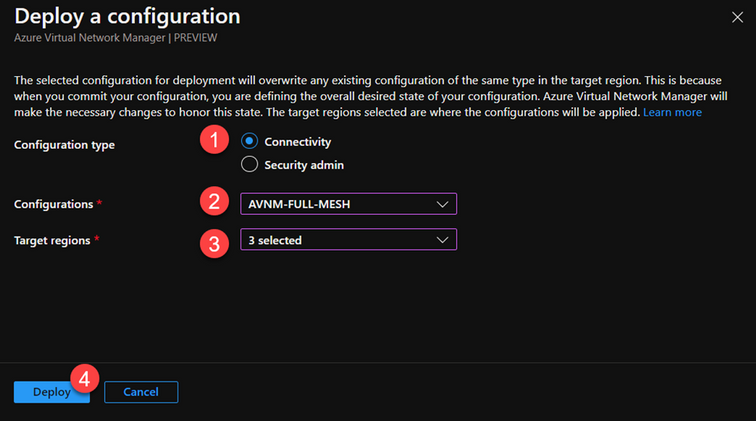 When Do You Need to Re-deploy?

Putting it all Together

So now we’ve looked at the building blocks of the new Azure Virtual Network Manager and how they fit together to control a potentially large and far-ranging set of Azure VNets. We’ve seen that AVNM is a very powerful central management tool for VNets. It can control connectivity and security across a customizable scope of VNets automatically and reduce the administrative burden for managing large (or even medium or modestly small) Azure VNet infrastructures. Overlapping network managers scoped to specific targets can provide laser-focused fine-grained impact. Different organizational resources can be given scoped-down network managers that they have control over.

This new solution can reduce the management burden of Azure VNet management significantly and offer a way to enforce enterprise standards from the highest governance level to as low and granular as desired.

AVNM is currently in Public Preview. Here are a few resources to get you started: