Our documentation here provides clear guidance on choosing the best possible architecture based on the requirements and location.

The reference architecture for Active/Passive deployment is as per below. 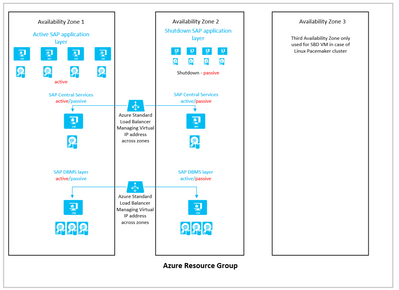 In order to achieve the switch as described above, we need 2 things

Azure Automation Runbooks are a great way to create event-based automation to respond to issues.  Automation runbook can be triggered directly from Alert action with Azure Monitor or using webhooks. When using webhook it is highly recommended to secure it using Private Endpoint and restrict public access . In our scenario the runbook will do the following

If you would like to run some checks before step4, you could add an approval workflow before Step 4 is carried out. This can be done by setting up a simple Logic app to display a Team's adaptive card or email workflow or raising incidents directly into a ticketing system of your choice.

In this blog we saw one of the possible approaches for  automated switching of SAP Application servers in an Active/Passive setup of SAP deployment across Zones.  The approach and the runbooks can also be tweaked for Active/Active scenario to handle the case of complete Zone failure to ensure that minimum number of application servers are always active across the zones.