As the fastest growing business app in the history of our company, Microsoft Teams is gaining a strong foothold with our Office 365 enterprise users. Millions of enterprise employees are now starting their day in Teams, living their day in Teams and wrapping up their day in Teams. One of the core value drivers within this productivity workspace is its extensible and customizable platform – essentially bringing modern SaaS app experiences within the scaffolding of the product itself. Thanks to 250+ apps on the public app store and countless more on private, organization-specific app catalogs inside Teams, it’s natural for a typical user to expect her organizational tools and most importantly, common workflows to be accessible inside Microsoft Teams.

Broadly speaking, there are 2 methods of surfacing your organizational workflows inside Microsoft Teams:

LCNC democratizes creating and surfacing workflows as “apps” inside Teams – enabling (a) a modern end-user experience in addition to (b) low cost and time of workflow development. During our evangelism and consultative work with some of the top enterprise customers using Microsoft Teams today, approvals is one such kind of workflow that seems to exist universally.

Let’s see how you can build a simple approval workflow the LCNC way using just SharePoint Online + Microsoft Flow + Microsoft Teams, and nothing else - no web browser, no email, no Microsoft Flow mobile application etc. participating in the mix. The entire workflow will begin and end for all participants within Microsoft Teams itself – resulting in minimum context switching and maximum productivity.

Let’s imagine that you manage the Travel Desk for your company. Your team arranges home drops via a company-owned shuttle service to employees staying late in the evening beyond regular transport hours. You want to surface a shuttle request workflow within Microsoft Teams whenever a new drop request is made by an employee. One of your Travel Desk team staff needs to look into the request, validate against policy and then approve it. The requester employee must get notified with the status of their request in Teams.

Setting up the Components

This is how you – as the manager of the Travel Desk – design a simple approval flow for approvers on your team:

Notifying about a New Approval Request

Taking Action on an Approval Request

Notice the Approve and Reject action buttons on the connector card posted into the channel. Your approver can decide to action on the request and even add their comments. The JSON payload for the card you specified in the Body field of the HTTP action contains the actions. Here’s the snippet that defines what should happen when the user chooses the action Approve. 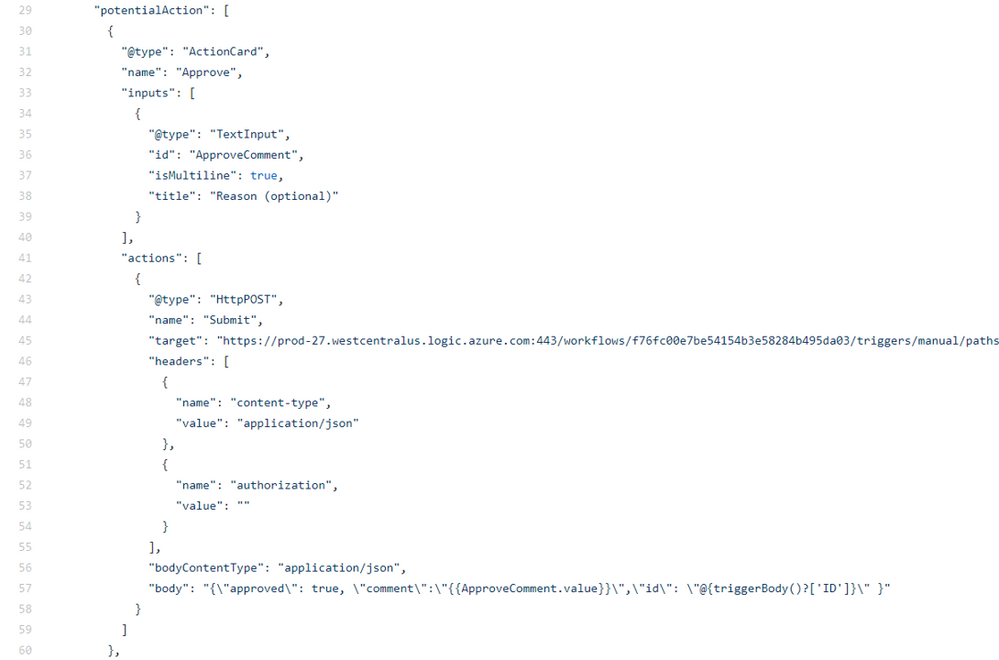 The most important piece in the JSON code above is the “target” value specified which defines the URL endpoint of the service that receives and then acts on the action made by the user (your approver in this case). At a high level. this is what happens when the approver hits Submit on the card:

This means the target URL is basically an Internet-reachable endpoint which can receive action data. So how do you obtain the target URL for your approval flow?

This is the essence of our low code / no code solution. Usually, target URLs need a web service to be run and exposed on the Internet. However, Microsoft Flow’s trigger “Request — When a HTTP request is received” does exactly this. The trigger generates a HTTP POST URL, which can trigger a Flow whenever an incoming API call hits this target. Therefore, we setup another Flow with this trigger. 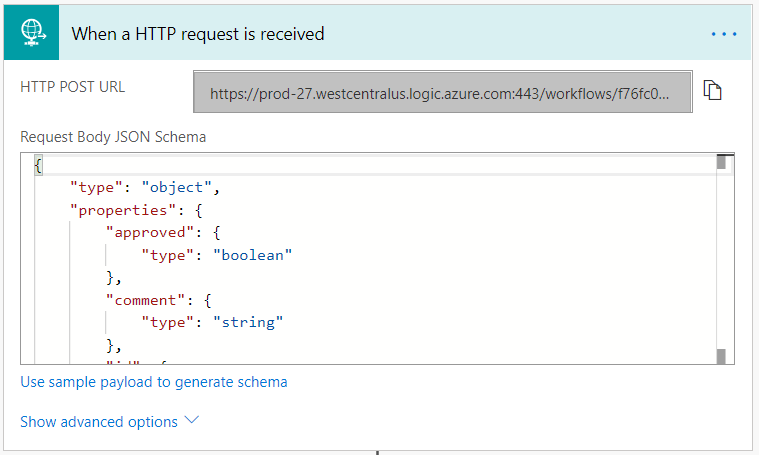 We will also need a JSON schema defining the format of the request that will hit this HTTP target endpoint. To simplify schema creation, you can use one of many schema generators available on the web for eg: jsonschema.net. A reference schema for the connector card is available on GitHub to get you started.

The HTTP POST URL will get generated once you Save the Flow.

This URL needs to be picked up and inserted as the target URL in the Connector card’s JSON Body field defined in the first Flow you’ve setup. Note that the same target URL is specified in case of both actions – Approve and Reject. 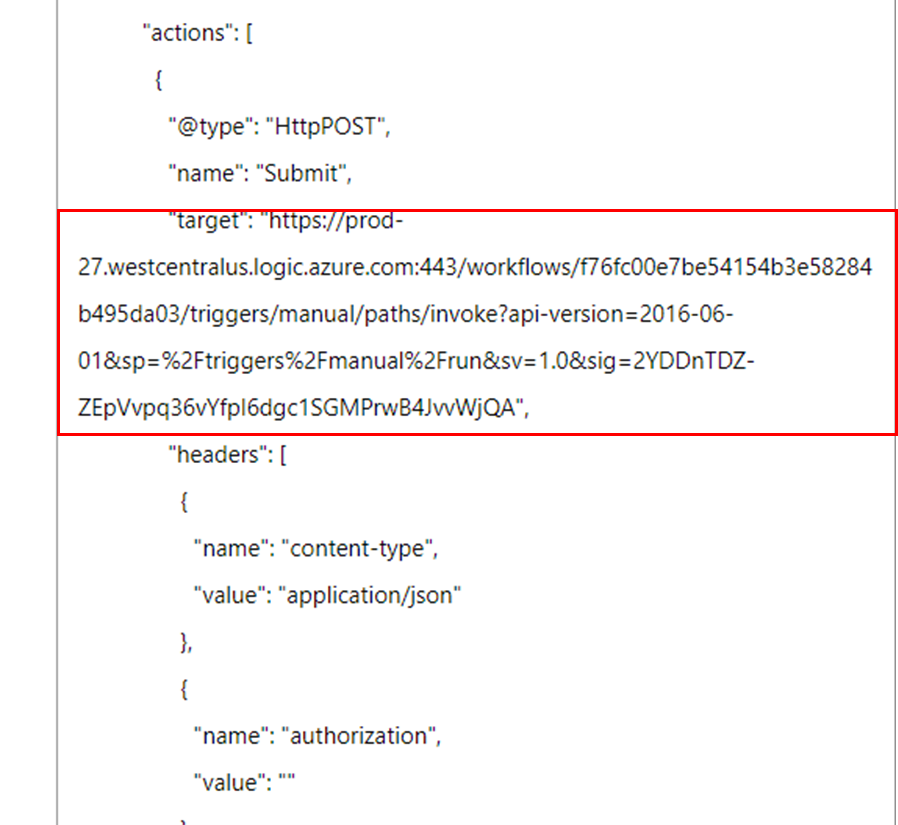 The subsequent actions for this Flow look like the following: 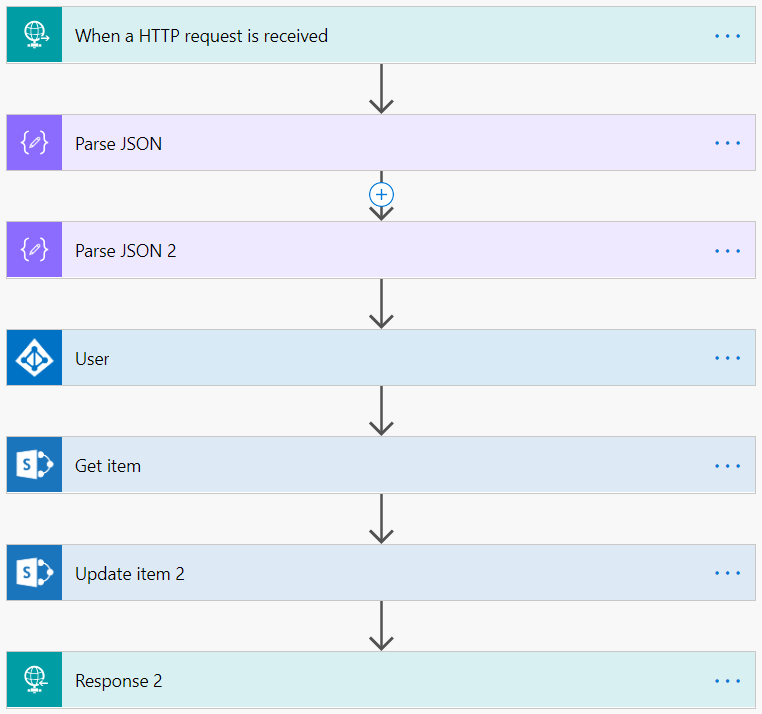 Basically, the remaining steps of the Flow deal with receiving the HTTP payload coming to the target URL, parsing the same, extracting required information such as the action taken, comments and the identify of the person who’s taken the action in order to store it in the same SharePoint list. This is how it is achieved:

Closing the Loop: Feedback in Channel

It is imperative to give both the reviewer and the requesting employee feedback once the approval is executed.

We hope this hands-on blog post has enabled you to set up your first LCNC approval workflow in Microsoft Teams using just SharePoint Online + Microsoft Flow, Connectors in channels and nothing else - no web browser, no email, no Microsoft Flow mobile application etc. Happy approving!

Special thanks to Wajeed Hanif Shaik - our Microsoft Teams platform developer support engineer who was able to get this LCNC approval workflow up and running in a matter of a few hours!