Here it goes how to find how many open connections you have very simply:

1) Open SSMS or Synapse Studio or Azure Data Studio whatever you prefer.

2) Connect to your Synapse  serverless SQL endpoint. If you are not connecting from the Synapse Studio, you can find the endpoint on the  Azure portal when checking your workspace overview details - Fig 1 Overview (yellow).

3) Now let's check the active sessions and requests. Run the following queries and check the results. This query will expose the sessions and current requests from those sessions in a summarized way.

Another way to monitor is the next query that will summarize the connections per program, login, and database:

For example, as a result in my own environment I have the following for the second query - Fig 2 Query Results: 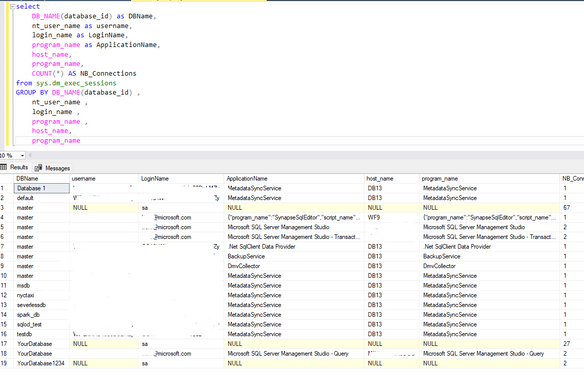 As a result, information such as SQL or AAD user, login, application, and hostname will be exposed. As also you may note the results of internal sessions related to the Medatasync service on Serverless. Medatasync does what the name implies sync the metadata with other components. This is internal and is not something a user has control over.

Summary:  The  dynamic managed views (DMVs) above provide you a way to check out the sessions and active requests from those open sessions open. When I used those DMVs to understand the requests I have coming from my application to serverless I could confirm there was no limitation on the open sessions as I mentioned before.

Following are some examples of possible  scenarios to use this logic:

So for the possible question that you may have up to this point... But...Would that mean is there a hard limit on connections inside serverless?

The short answer is No. What must be considered for serverless is not a limited number of connections but the number of active running queries.

Considerations about the active running queries:

And this is documented as follows:

Check if there is a concurrent workload running on the serverless pool because the other queries might take the resources. In that case you might split the workload on multiple workspaces."

Note: Thanks to Sergio Fonseca, Silas Mendes, and Ali Saleh on the CSS teamwork side.