We are now releasing a new set of server roles which support server- and database management without using admin-accounts and in addition make administration at scale even easier to Public Preview.

The 4 additional roles are:

the previously released roles are:

The new server-roles that can be assigned to server logins to enable customers to assign and delegate job functions for server-wide metadata access and access to certain management commands without requiring Server Admin or AAD Admin privileges. This helps comply with the Principle of Least Privilege and implement role separation (sometimes also interchangeably referred to as Separation of Duties).

Each of these new server-roles includes a specific set of permissions. In SQL Database those permissions cannot be assigned individually on the server scope but using those roles one can grant them to a Login. This is a new method to grant server permissions across a logical server and all databases hosted on that logical server in Azure SQL Database, aside from assigning Server/AAD Admin, which in many cases is considered too powerful.

In the following let’s have a look at each role individually:

The ##MS_SecurityDefinitionReader##-role predominantly will be useful for read-only server-auditing where an auditor will need to see the contents of system-related static system metadata such as Login and User names, permissions of principals and role membership.

This is because it holds the permission - holds CONNECT ANY DATABASE on server-scope, which then inherits the CONNECT permission on each database.

i.e., a member of ##MS_DatabaseConnector## + ##MS_ServerStateReader## will have the permission VIEW SERVER STATE + VIEW DATABASE STATE on all databases, without requiring Users to be created. This greatly simplifies permission assignment via roles at scale.

The ability to grant the Connect-permission to all databases (without further permissions) makes this role the ideal counterpart for ##MS_ServerStateReader##, ##MS_DefinitionReader## and ##MS_SecurityDefinitionReader## server roles.
The following diagram shows how a Login “Juanita” is member of both the ##MS_DatabaseConnector## (green in diagram) and the ##MS_ServerStateReader## (blue) roles and in result can connect to any database and read any Server and database level DMV (Dynamic Management View). 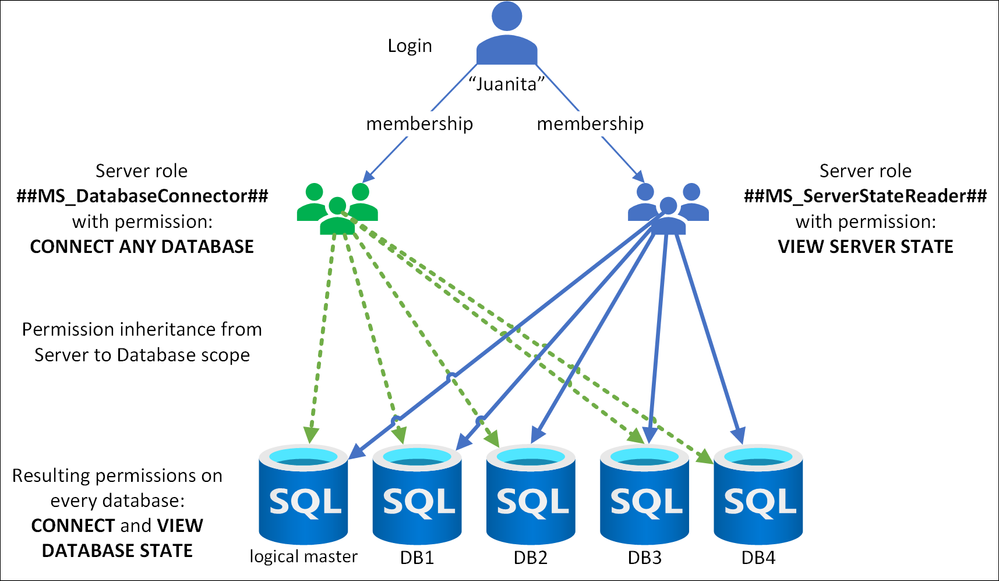 Members of the ##MS_LoginManager## fixed server role can create and delete logins.
Just as with the ##MS_DatabaseManager##-role, for Azure SQL Database, it is recommended to use this server role over the special loginmanager database level role that exists in master and was previously used to reach the same goals but required a User account in master-database.

The new server roles in conjunction with the previous set enable customers to grant specific lower privileges to personnel that should not have full admin-permissions and by using the ##MS_DatabaseConnector##-role can do so in a scalable manner: for a whole logical server in Azure SQL Database.
When it comes to SQL Server 2022 (now in Public Preview), these roles could be imitated by creating custom server roles which are available in SQL Server, but including them as built-in roles the same way as for Azure SQL DB will hopefully enable simpler management from cloud to on-prem and for migration back & forth. Also we are aware that some customers often prefer to use built-in roles over custom roles per principle.