Recent breaches surface the need for all organizations to adopt an assume breach mindset to security.  While organizations continue to invest heavily in the products and technology to prevent breaches, having automated threat detection and response capabilities to identify malicious actors and actions in your environment has become the need of the hour.  To enable these capabilities at scale, organizations need to have cutting-edge monitoring and response tools along with the detection logic to identify threats.

The cloud native Azure Firewall provides protection against network-based threats.  Azure Sentinel is the cloud native SIEM and SOAR solution which provides threat detection, hunting, and automated response capabilities for Azure Firewall.  While this is great, customers must go through multiple blades and steps in Azure Sentinel to deploy and configure all the detections, hunting queries, workbooks, and automation, which can be an overhead.

In case of an attack from an external adversary or malicious activity in a trusted network, the traffic representing the anomaly must inevitably flow through the network where it will be processed and logged by network devices such as Azure Firewall.  While real time threat detection and prevention features such as IDPS etc. can enable you to take actions for the traffic patterns in question ahead of time, there will be scenarios which require a fine gained evaluation before making decisions to block traffic.  This is where Azure Firewall detections and hunting queries in Azure Sentinel provide you with a method to detect threats and respond to them automatically.

The Azure Firewall Solution provides new threat detections, hunting queries, a new firewall workbook and response automation as packaged content.  This enables you to find the appropriate solution easily and then deploy all the components in the solution in a single step from the Solutions blade in Azure Sentinel.

Below are the details of the components included in the Firewall Solution:

Note: You may skip configuration of the Azure Firewall Connector and Playbooks pre-requisites, if you are not planning to use the response automation features at the time of deploying the Firewall Solution

The Azure Firewall solution can be deployed quickly from the Solutions (Preview) gallery in Azure Sentinel.  There are no other prerequisites to deploy and start using the Analytic Rule based detections, Hunting Queries, and the Firewall Workbook included in the solution package.  Please see the screen capture below for a step-by-step process to deploy the firewall solution.

How to Configure Solution Components in Azure

After you have successfully deployed the Azure Firewall solution, please use the instructions below to enable and configure the different components of the solution.

Use the following instructions to launch and configure the Azure Firewall Workbook deployed by the solution.

You can now select the appropriate timeframe and firewalls to visualize the logs in the different tabs of the Workbook.

Use the following instructions to run the Azure Firewall Hunting Queries deployed by the solution.

To see detailed results of a query run, click to select the query and click the View results button in the right pane.  This will open the Log Analytics workspace where you can modify the query to drill deeper into the logs.  The query logic can be modified and saved for future use.

Use the following instructions to enable and configure the Analytic Rule based detections deployed by the solution.

Now that the solution has been deployed and all components have been enabled/configured successfully, you can use the Firewall Workbook to visualize the Azure Firewall log data, use Hunting queries to identify uncommon/anomalous patterns and create incidents with the enabled detection rules.  You can also automate response for any Azure Firewall detections using the available Azure Sentinel Playbooks.

In this section, we will use an example scenario to walk you through the steps involved in configuring and testing one of the detections included in the Azure Firewall Solution and respond to it by making the desired update to the Azure Firewall configuration automatically, with one of the Playbooks also included in the solution.  To provide learning aid, a prerecorded end to end demonstration for the scenario is also available at end of this section.  The instructions preceding the demo video are to assist you in setting up and configuring your environment so you can follow along and perform testing based on the scenario outlined below.  We encourage you to follow the step by step process in this section to gain familiarity with key concepts and configuration requirements.

In the following Example Scenario, you will use the Port Scan rule provided in the solution to detect scanning activity and respond to it automatically using the AzureFirewall-BlockIP-addToIPGroup Playbook.  In this scenario, upon successful detection of a port scan, an incident will be created in Azure Sentinel.  The Playbook will be triggered by the Azure Sentinel Automation Rule which will allow you to add the IP address of the port scanner (source host) to an IP Group used in a deny network rule on Azure Firewall to block traffic from the port scanner.

To test the Port Scan detection and automated response capability, you will need a test environment with:

Here is a diagram of an example setup.  We will be using this setup as reference for the remainder of this document.

Before you can begin testing, please follow the instructions below to ensure Azure Firewall, Azure Firewall Connector and Playbooks (automation) and Azure Sentinel are ready:

Please ensure that your Azure Firewall has the following configurations:

Please follow the instructions below to configure the Port Scan detection rule and create an automation rule in Azure Sentinel.

Please see the screen capture below for a step-by-step process to modify the Port Scan detection rule and create an Automation rule in Azure Sentinel.

We have deployed the Azure Firewall Solution to the Azure Sentinel Workspace and configured the Azure Firewall Connector + Playbooks in this environment.  As described in the previous section (Configuration Requirements in Example Scenario), we have enabled and configured the Port Scan detection rule along with an Automation Rule to trigger the AzureFirewall-BlockIP-addToIPGroup Playbook.  To start the automated detection and response process, we initiate a port scan from the Kali Linux VM in the Client Spoke VNET to the Windows 2019 VM in the Server Spoke VNET using the following command: nmap -Pn -p 1-65535 -v <IP address of the Windows Server 2019 VM>

Please review the following section to understand all the steps in the automated detection and response flow.

How Automated Detection and Response Worked in Example Scenario

The diagram below depicts the end-to-end process starting from the time a port scan is initiated, the Azure Firewall Playbook is triggered based on the detection rule and the IP Group used in the Deny Network Rule in Azure Firewall is updated with the IP address of the port scanner (Kali VM).  All the steps are called out in the diagram and explained below. 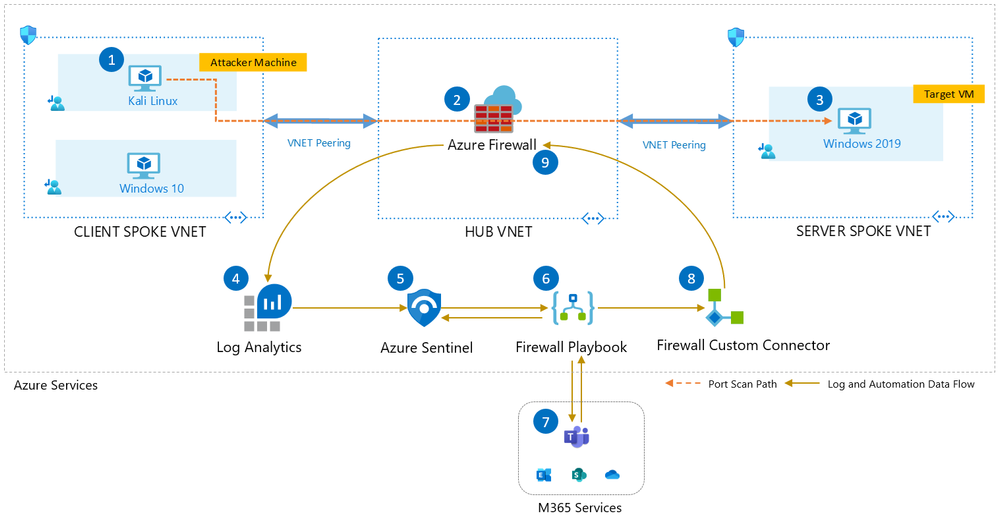 Please watch the prerecorded demo below, which shows how to simulate a port scan and walks you through the automated detection and response process in our example scenario.

The Azure Firewall Solution provides net new detections, hunting queries, workbook and response automation which allow you to detect prevalent techniques used by attackers and malware.  The Solution provides a streamlined method to deploy all packaged components at once with minimal overhead and start utilizing them in your environment.  We encourage all customers to utilize these new detection and automation capabilities to help improve your overall security posture.

We will continue to enhance the firewall solution in the future with new detection and automation capabilities to meet your needs.  You can also contribute new connectors, playbooks, detections, workbooks, analytics and more for Azure Firewall in Azure Sentinel.  Get started now by joining the Azure Network Security plus Azure Sentinel Threat Hunters communities on GitHub and following the guidance.