If you need to write REST APIs (.Net Core) to expose or complete IoT Hub APIs or create a facade, this extension will help you to save a few minutes. 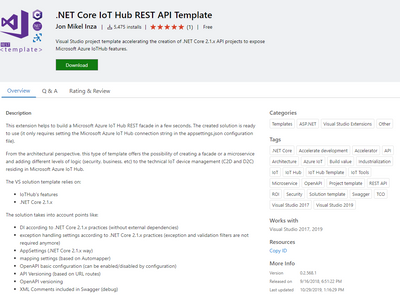 It creates a ready to use solution in a few seconds and allows you to focus on important code (business logic, etc).

- minimalistic solution with required dependencies only

The only thing you need to do is to set the IoT Hub connection in the configuration file (appsettings.json).

Hi @jonmikeli
It seems a good tool indeed.
But why are you creating a REST API to expose IoT Hub?
Do you know the current IoT Hub supported endpoints which already expose either a HTTPS REST API or SDKs to manage, receive and send messages?
PTAL: https://docs.microsoft.com/en-us/azure/iot-hub/iot-hub-devguide-endpoints
0 Likes
Reply

Indeed, Azure IoT Hub already exposes its endpoints but these endpoints are quite "technical".

The idea of the proposed API solution template is to build a kind of "facade" allowing to add logic (business logic, technical logic, whatever) on top of the exposed endpoints by default. Most of the IoT projects I have been involved in needed it in a way or another. So, the idea was to make my life easier and by the way, share it with other developers who could face the same need :).

In other words, the extension creates a REST API solution template allowing to add logic before calling the technical endpoints exposed by Azure IoT Hub.

Perfect clear!
Thanks for sharing the tool and pointing it out. =)
1 Like
Reply