My name is Susan Buchanan, and I am a Support Escalation Engineer with the Windows Performance Team at Microsoft. Does Performance Data Collection got you singing the Blues? This blog addresses how to troubleshoot High CPU and unaccounted memory usage or memory leak to include identifying and data collection using the CLUE tool written by Clint Huffman. A special thank you to Ron Stock for writing me a bad driver to use in demonstration.

I want to discuss how to perform data collection when an issue may be intermittent, troublesome to catch, ongoing, or even reproducible at will. For many years, data collection was manual, time consuming, and often labor some.

It's frustrating when you obtain a set of data only to realize you needed an additional dataset and must perform the data capture again. You might start with a RAMMAP and a performance monitor on the first data collection, move to a pool monitor or WPR/Xperf on another collection, and then might realize you also needed a tasklist or to find which drivers were associated with which pool tags you need another set of data collected.

Performance is Complicated! It really is.

Well, those days are gone! Thanks to CLUE which runs an ETW trace in the background until a threshold found in the config.xml is hit and then automagically collects data via Tasks in Task Scheduler! This gives you a more robust view of what has occurred since the data capture shows prior to the event, and then the event in the ETW trace without manual intervention.

CLUE was written by a Microsoft employee who has made this code open source and extensible. You can modify the config.xml to create your own scenarios, increase the data captures, and much more.

Automatically collects a counter log and ETW trace whenever the following conditions occur:

Requires administrator rights to install. After installation, non-admin users can use the device normally and data collection will still occur even for user-initiated data collections. 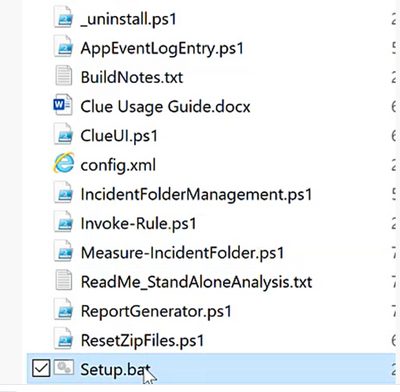 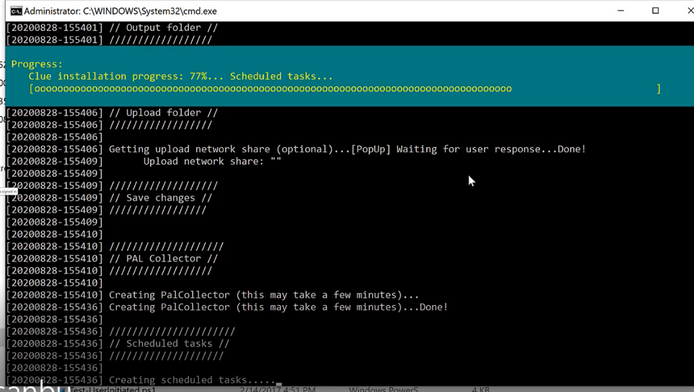 CLUE is also extensible allowing for more performance rules by modifying the config.xml without changing the binaries.

Following are 2 scenarios describing how CLUE can be useful in troubleshooting High CPU and High Memory.

What is causing high CPU on my server?

In task manager we can easily see that it is the CPU Stress application; but what if it wasn’t so obvious? What if we needed to drill further down by CPU, or by stack?

Of course, the first line of defense if the issue is occurring in real time is to pop open Task Manager to see what it shows. This is not always possible which is another reason why CLUE comes in handy. 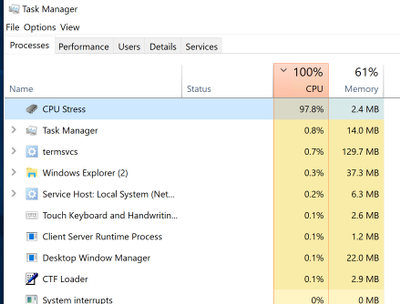 Task Manager shows both kernel and user mode in the graph. Kernel mode is in (darker blue/grey area)

But what if the issue wasn’t in state? Or, what if Task Manager wasn’t so helpful?

Luckily, CLUE was running, and we know from the ETW trace what CPU usage looked like prior to and during the occurrence.

From the C:\ClueOutput folder we see the following data captured due to the ProcessorTime > 90% and DiskLatency > 25ms hit.

When we expand the zipped file for Processor Time > 90%, we see the following data captured: When we are looking for high CPU, we typically want to look at the following counters:

Wow – our processor time is significantly high for much of our 6-minute performance monitor. 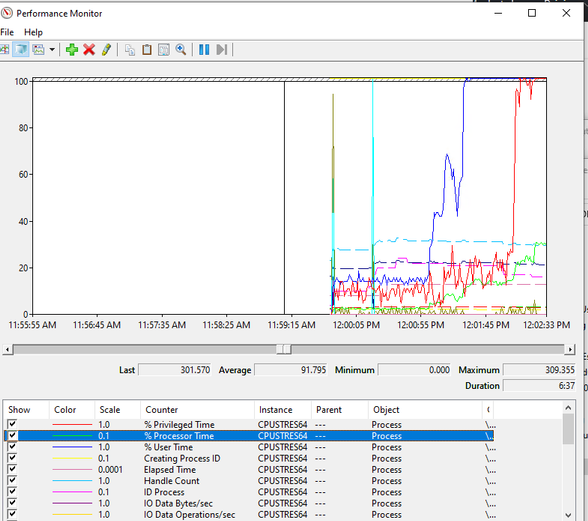 Check out the Processor Queue Length which is > 10 on average. That’s not looking good here. So, let’s drill down into who is using the %Processor Time. 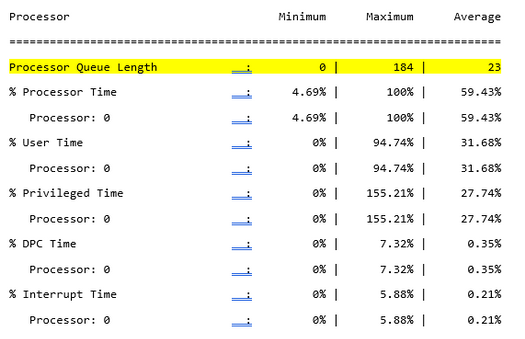 When we add counters for Processor/%ProcessorTime and look at the instances we quickly see CPUStres64.exe is the highest consumer. There are even gaps where the %ProcessorTime exceeded 100 percent and went to around 180% in the data. 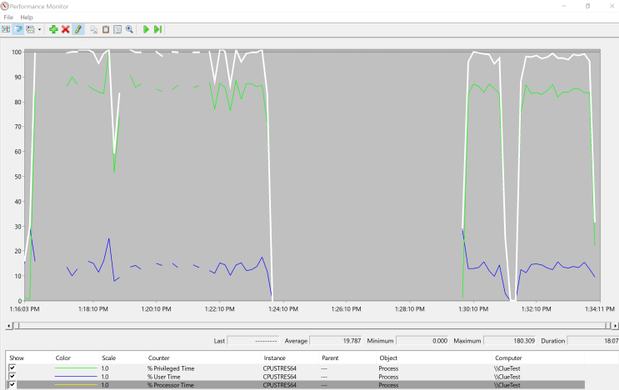 From the CLUE ETL (Windows Performance Recorder trace), we see the highest CPU is 0. Ok, in my example I only have 1 CPU – but it’s good to check if the CPUs are being consumed equally.

In another example, where I have multiple processors and CPUStres64.exe is the culprit we see where each processor is hit fairly, equally by the process.

Where did all my Memory Go? And why did my Server become unresponsive?

Scenario #2: Windows server 2019 that inevitably runs us of memory due to a resource depletion, but we cannot figure out why?

Looking at task manager is leaving you without a "clue" as the top consumer is just 75 MB. 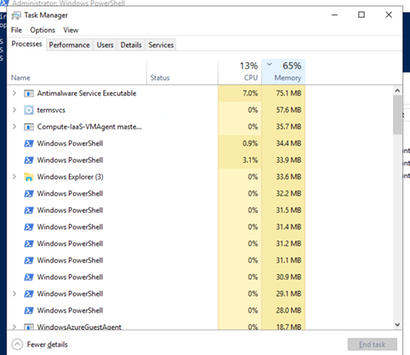 If we were to manually gather the data, it would look like this:

Obtain a perfmon to determine there is a memory issue. Oh, there is, but now I need more data.

Memory - some metrics to keep in mind when you look at the data.

The manual way which would be lengthier and more time consuming would be to:

Here’s CLUE to the rescue. CLUE was running a Perfmon trace and noticed that NonPaged Pool consumption was > 10% for the following tags:  LEAK and MxGN. It then automagically collects data needed to help you isolate this further (like Perfmon, Poolmon, and in some instances an ETL trace).

Looks like my good friend, Ron wrote me a bad driver that was allocating but not deallocating my memory using the LEAK Tag.

*Normally I would show a larger time frame between poolmon data, but this is just for demo purposes. Clearly you see in a matter of minutes the number of Frees is 0 and the number of Bytes is growing.

LeakyFlt is bad news as it’s borrowing the OS’s memory and never freeing it. The OS expects for applications to borrow memory and resources, but they should deallocate/Free it as well.

Clue stepped up and in the TagstoDrivers Folder even tried to help identify what files might be using the tags.

So, I stopped the service that was using LeakyFlt.sys and BAM the problem is solved.