Remove Lingering Objects that cause AD Replication error 8606 and friends

Remove Lingering Objects that cause AD Replication error 8606 and friends


Hi all, Justin Turner here ---it's been a while since my last update . The goal of this post is to discuss what causes lingering objects and show you how to download, and then use the new GUI-based Lingering Object Liquidator (LOL) tool to remove them. This is a beta version of the tool, and it is currently not yet optimized for use in large Active Directory environments.


This is a long article with lots of background and screen shots, so plug-in or connect to a fast connection when viewing the full entry. The bottom of this post contains a link to my AD replication troubleshooting TechNet lab for those that want to get their hands dirty with the joy that comes with finding and fixing AD replication errors.  I’ve also updated the post with a link to my Lingering Objects hands-on lab from TechEd Europe.


Lingering objects are objects in AD than have been created, replicated, deleted, and then garbage collected on at least the DC that originated the deletion but still exist as live objects on one or more DCs in the same forest. Lingering object removal has traditionally required lengthy cleanup sessions using tools like LDP or repadmin /removelingeringobjects. The removal story improved significantly with the release of repldiag.exe . We now have another tool for our tool belt: Lingering Object Liquidator. There are related topics such as “lingering links” which will not be covered in this post.


The dominant causes of lingering objects are


While knowledge of creates and modifies are persisted in Active Directory forever, replication partners must inbound replicate knowledge of deleted objects within a rolling Tombstone Lifetime (TSL) # of days (default 60 or 180 days depending on what OS version created your AD forest). For this reason, it is important to keep your DCs online and replicating all partitions between all partners within a rolling TSL # of days. Tools like REPADMIN /SHOWREPL * /CSV, REPADMIN /REPLSUM and AD Replication Status should be used to continually identify and resolve replication errors in your AD forest.


System time jump more than TSL # of days in the past or future can cause deleted objects to be prematurely garbage collected before all DCs have inbound replicated knowledge of all deletes. The protection against this is to ensure that :

The importance of configuring safeguards can't be stressed enough. Look at this post to see what happens when time gets out of whack.


USN rollbacks are caused when the contents of an Active Directory database move back in time via an unsupported restore. Root causes for USN Rollbacks include:

Events, errors and symptoms that indicate you have lingering objects

A comparison of Tools to remove Lingering Objects


Why you should care about lingering object removal


Widely known as the gift that keeps on giving, it is important to remove lingering objects for the following reasons

Once present, lingering objects rarely go away until you implement a comprehensive removal solution. Lingering objects are the unwanted houseguests in AD that you just can't get rid of. 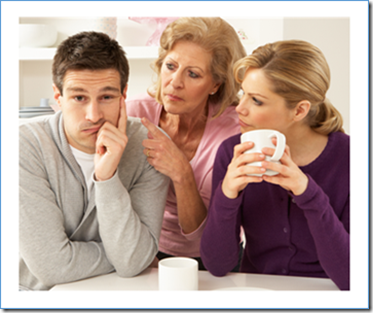 
We commonly find these little buggers to be the root cause of an array of symptom ranging from logon failures to Exchange, Lync and AD DS service outages. Some outages are resolved after some lengthy troubleshooting only to find the issue return weeks later.


The remainder of this post, we will give you everything needed to eradicate lingering objects from your environment using the Lingering Object Liquidator.


Repldiag.exe is another tool that will automate lingering object removal. It is good for most environments, but it does not provide an interface to see the objects, clean up RODCs (yet) or remove abandoned objects.

How to obtain Lingering Object Liquidator


Note: You may have to create a profile on the site if you have never participated in Connect.

4. Click the Downloads link to see a list of downloads or this link to go directly to the Lingering Objects Liquidator download. (Note: the direct link may become invalid as the tool gets updated.)


6. Double click on the downloaded executable to open the tool.


1. Install Lingering Object Liquidator on a DC or member computer in the forest you want to remove lingering objects from.


2. .NET 4.5 must be installed on the computer that is executing the tool.


4. The admin workstation must have connectivity over the same port and protocol required of a domain-joined member computer or domain controller against any DC in the forest. Protocols of interest include DNS, Kerberos, RPC, LDAP and ephemeral port range used by the targeted DC See TechNet for more detail. Of specific concern: Pre-W2K8 DCs communicate over the “low” ephemeral port between 1024 and 5000 while post W2K3 DCs use the “high” ephemeral port range between 49152 to 65535. Environments containing both OS version families will need to enable connectivity over both port ranges.


5. You must enable the Remote Event Log Management (RPC) firewall rule on any DC that needs scanning. Otherwise, the tool displays a window stating, "Exception: The RPC server is unavailable" 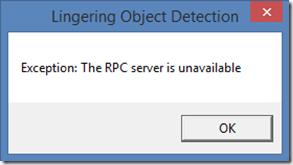 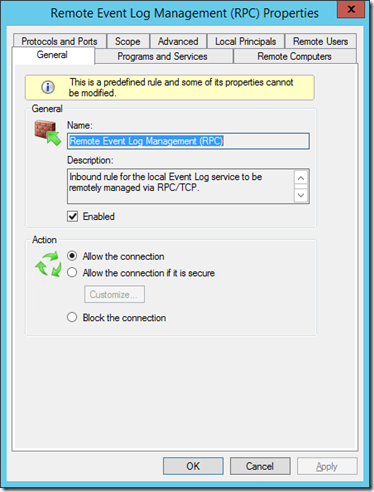 Run the tool as Domain Administrator (Enterprise Administrator if you want to scan the entire forest) Error 8453 is observed if the tool is not run elevated. 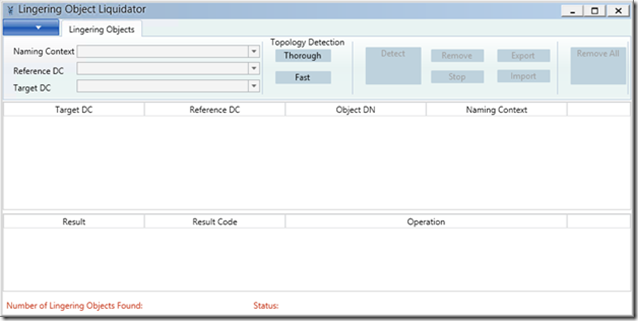 Fast detection populates the Naming Context, Reference DC and Target DC lists by querying the local DC. Thorough detection does a more exhaustive search of all DCs and leverages DC Locator and DSBind calls. Note that Thorough detection will likely fail if one or more DCs are unreachable.


3. Take a quick walk through the UI: 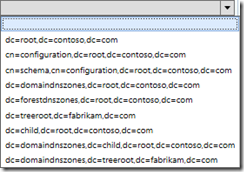 Reference DC: the DC you will compare to the target DC. The reference DC hosts a writeable copy of the partition.

Note: ChildDC2 should not be listed here since it is an RODC, and RODCs are not valid reference DCs for lingering object removal.

Target DC: the DC that lingering objects are to be removed from

4. Click Detect to use these DCs for the comparison. If you want to scan all partitions and all DCs: Leave all fields blank to have the entire environment scanned, and then click Detect.


The tool does a comparison amongst all DCs for all partitions in a pairwise fashion when all fields are left blank. In a large environment, this comparison will take a great deal of time (possibly even days) as the operation targets (n * (n-1)) number of DCs in the forest for all locally held partitions. For shorter, targeted operations, select a naming context, reference DC and target DC. The reference DC must hold a writable copy of the selected naming context. Note that clicking Stop does not actually stop the server-side API, it merely stops the work in the client-side tool.

During the scan, several buttons are disabled. The current count of lingering objects is displayed in the status bar at the bottom of the screen along with the current tool status. During this execution phase, the tool runs in an advisory mode and reads the event log data reported on each target DC. 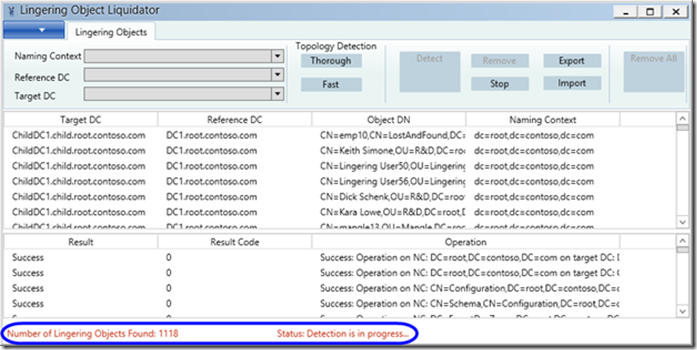 When the scan is complete, the status bar updates, buttons are re-enabled and total count of lingering objects is displayed. The Result pane at the bottom of the window updates with any errors encountered during the scan.


If you see error 1396 or Error 8440 in the status pane, you are using an early beta-preview version of the tool and should use the latest version.

Error 1396 is logged if the tool incorrectly used an RODC as a reference DC.

Error 8440 is logged when the targeted reference DC doesn't host a writable copy of the partition. 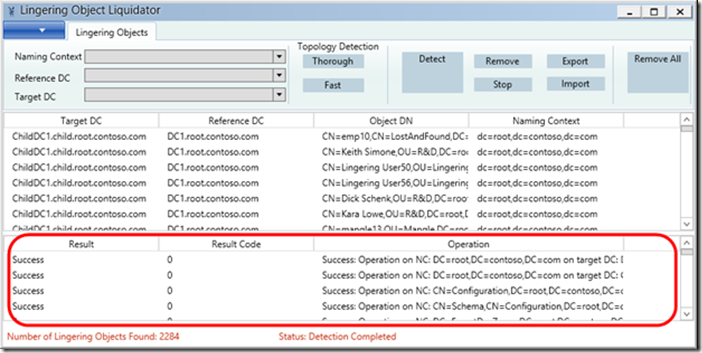 
The Export button allows you to export a list of all lingering objects listed in the main pane into a CSV file. View the file in Excel, modify if necessary and use the Import button later to view the objects without having to do a new scan. The Import feature is also useful if you discover abandoned objects (not discoverable with DRSReplicaVerifyObjects) that you need to remove. We briefly discuss abandoned objects later in this post.


A note about transient lingering objects:


Garbage collection is an independent process which runs on each DC every 12 hours by default. One of its jobs is to remove objects that have been deleted and have existed as a tombstone for greater than the tombstone lifetime number of days. There is a rolling 12-hour period where an object eligible for garbage collection exists on some DCs but has already been removed by the garbage collection process on other DCs. These objects will also be reported as lingering object by the tool, however no action is required as they will automatically get removed the next time the garbage collector process runs on the DC.


The tool allows you to remove objects a handful at a time, if desired, using the Remove button: 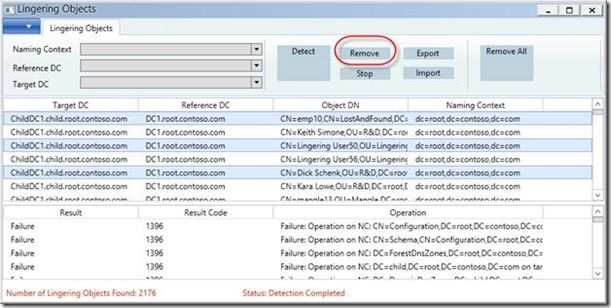 The status bar updates with the new count of lingering objects and the status of the removal operation:


The tool dumps a list of attributes for each object before removal and logs this along with the results of the object removal in the removedLingeringObjects.log.txt log file. This log file is in the same location as the tool's executable.


Removal of all objects


The Remove All button, removes all lingering objects from all DCs in the environment. 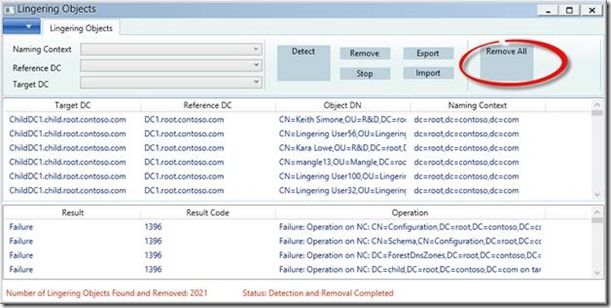 To remove all lingering objects from the environment:


1. Click the Remove All button. The status bar updates with the count of lingering objects removed. (the count may differ to the discovered amount due to a bug in the tool-this is a display issue only and the objects are actually removed)

2. Close the tool and reopen it so that the main content pane clears.


3. Click the Detect button and verify no lingering objects are found. 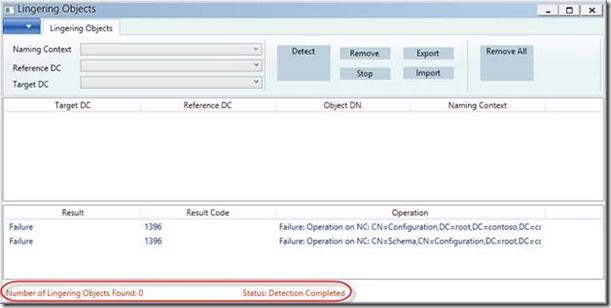 
The lingering object liquidator tool does not currently discover abandoned objects automatically so a manual method is required.


1. Identify abandoned objects based on Oabvalidate and replication metadata output.

Abandoned objects can be removed with the LDAP RemoveLingeringObject rootDSE modify procedure, and so Lingering Objects Liquidator is able to remove these objects.

2. Build a CSV file for import into the tool. Once, they are visible in the tool, simply click the Remove button to get rid of them.


Collect the data in a comma separated value (CSV) with the following data:


3. Once you have the file, open the Lingering Objects tool and select the Import button, browse to the file and choose Open. 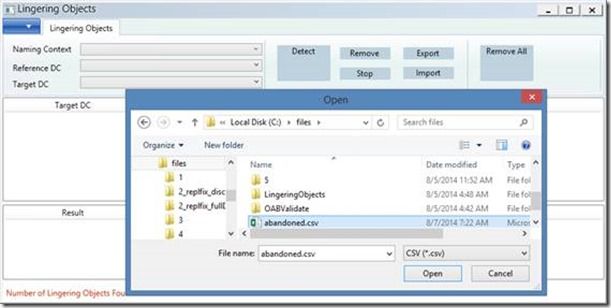 4. Select all objects and then choose Remove . 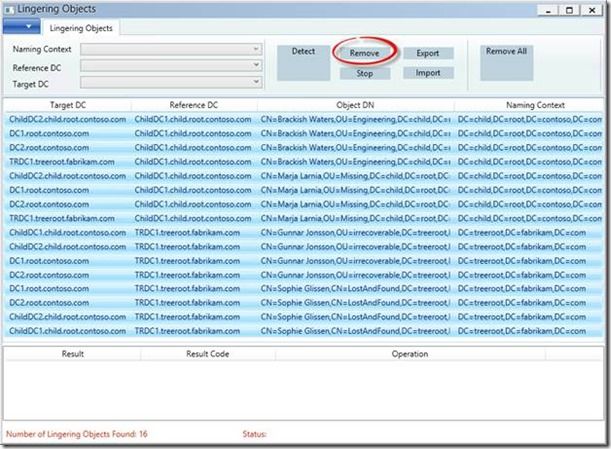 Review replication metadata to verify the objects were removed.


For those that want even more detail on lingering object troubleshooting, check out the following:


Finally, if you would like access to a hands-on lab for in-depth lingering object troubleshooting; let us know in the comments.


Justin Turner and A. Conner