First published on TechNet on Jan 06, 2012
Hi folks, Ned here and welcoming you to 2012 with a new Friday Mail Sack. Catching up from our holiday hiatus, today we talk about:

So put down that nicotine gum and get to reading!


Is there an "official" stance on removing built-in admin shares (C$, ADMIN$, etc.) in Windows? I’m not sure this would make things more secure or not. Larry Osterman wrote a nice article on its origins but doesn’t give any advice.


The official stance is from the KB that states how to do it:

Generally, Microsoft recommends that you do not modify these special shared resources.

Even better, here are many things that will break if you do this:


Overview of problems that may occur when administrative shares are missing
http://support.microsoft.com/default.aspx?scid=kb;EN-US;842715


That’s not a complete list; it wasn’t updated for Vista/2008 and later. It’s so bad though that there’s no point, frankly. Removing these shares does not increase security, as only administrators can use those shares and you cannot prevent administrators from putting them back or creating equivalent custom shares.

This is one of those “don’t do it just because you can” customizations.


The Windows PowerShell Get-ADDomainController cmdlet finds DCs, but not much actual attribute data from them. The examples on TechNet are not great. How do I get it to return useful info?


You have to use another cmdlet in tandem, without pipelining: Get-ADComputer . The Get-ADDomainController cmdlet is good mainly for searching. The Get-ADComputer cmdlet, on the other hand, does not accept pipeline input from Get-ADDomainController. Instead, you use a pseudo “nested function” to first find the PDC, then get data about that DC. For example, (this is all one command, wrapped):

When you run this, PowerShell first processes the commands within the parentheses, which finds the PDC. Then it runs get-adcomputer, using the property of “Name” returned by get-addomaincontroller. Then it passes the results through the pipeline to be formatted. So it’s 1 2 3.

Voila. Here I return the OS of the PDC, all without having any idea which server actually holds that role:

Moreover, before the Internet clubs me like a baby seal: yes, a more efficient way to return data is to ensure that the –property list contains only those attributes desired:

Get-ADDomainController can find all sorts of interesting things via its –service argument:


The Get-ADDomain cmdlet can also find FSMO role holders and other big picture domain stuff. For example, the RID Master you need to monitor.


I know about Kerberos “token bloat” with user accounts that are a member of too many groups . Does this also affect computers added to too many groups? What would some practical effects of that? We want to use a lot of them in the near future for some application … stuff.


Yes, things will break. To demonstrate, I use PowerShell to create 2000 groups in my domain and added a computer named “7-01” to them:

I then restart the 7-01 computer. Uh oh, the System Event log is un-pleased. At this point, 7-01 is no longer applying computer group policy, getting start scripts, or allowing any of its services to logon remotely to DCs: 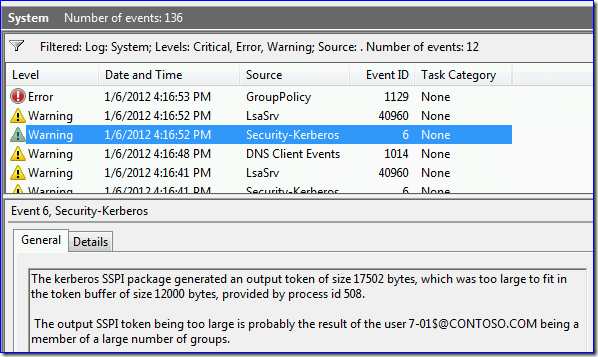 Oh, and check out this gem:

I’m sure no one will go on a wild goose chase after seeing that message. Applications will be freaking out even more, likely with the oh-so-helpful error 0x80090350:

“The system detected a possible attempt to compromise security. Please ensure that you can contact the server that authenticated you.”

Don’t do it. MaxTokenSize is probably in your future if you do, and it has limits that you cannot design your way out of. IT uniqueness is bad .


You don’t have to do anything; it just works. Because the new profile destination is on C, USMT just slots everything in there automagically :). The profiles will be on C and nothing will be on D except the store itself and any non-profile folders*: 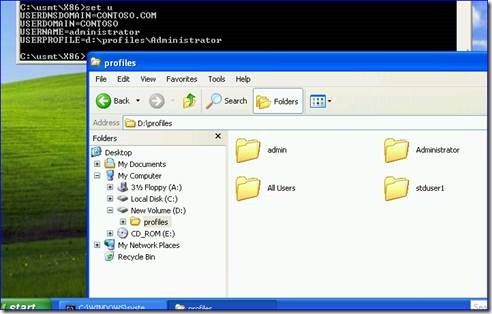 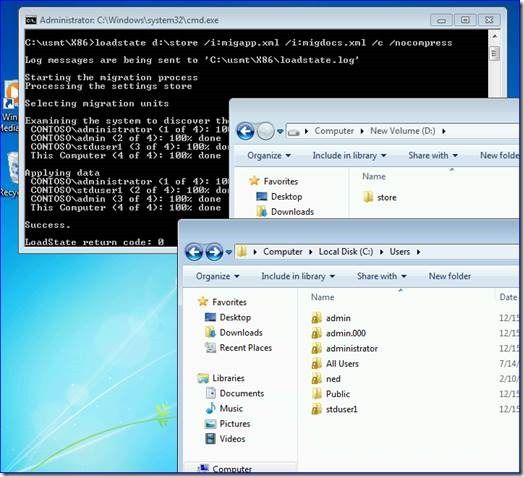 
If users have any non-profile folders on D, that will require a custom rerouting xml to ensure they are moved to C during loadstate and not obliterated when D is deleted later. Or just add a MOVE line to whatever DISKPART script you are using to expand the partition.


Should we stop the DFSR service before performing a backup or restore?


Manually stopping the DFSR service is not recommended. When backing up using the DFSR VSS Writer – which is the only supported way – replication is stopped automatically, so there’s no reason to stop the service or need to manually change replication:

Another bit of implied evidence – Windows Server Backup does not stop the service.

Stopping the DFSR service for extended periods leaves you open to the risk of a USN journal wrap . And what if someone/something thinks that the service being stopped is “bad” and starts it up in the middle of the backup? Probably nothing bad happens, but certainly nothing good. Why risk it?


In an environment where AGMP controls all GPOs, what is the best practice when application setup routines make edits "under the hood" to GPOs, such as the Default Domain Controllers GPO? For example, Exchange setup make changes to User Rights Assignment (SeSecurityPrivilege). Obviously if this setup process makes such edits on the live GPO in sysvol the changes will happen, but then only to have those critical edits be lost and overwritten the next time an admin re-deploys with AGPM.

From my point of view:

1. The Default Domain and Default Domain Controller Policies should be edited very rarely. Manual changes as well as automated changes (e.g. by the mentioned Exchange setup) should be well known and therefore the workaround in 2) should be feasible.

Not a perfect answer, but manageable.


In testing the rerouting of folders, I took the this example from TechNet and placed in a separate custom.xml.  When using this custom.xml along with the other defaults (migdocs.xml and migapp.xml unchanged), the EngineeringDrafts folder is copied to %CSIDL_DESKTOP%\EngineeringDrafts' but there’s also a copy at C:\EngineeringDrafts on the destination computer.

I assume this is not expected behavior.  Is there something I’m missing?


That original rerouting article could state this more plainly, I think. Hardly anyone does this relativemove operation; it’s very expensive for disk space– one of those “you can, but you shouldn’t” capabilities of USMT. The first example also has an invalid character in it (the apostrophe in “user’s” on line 12, position 91 – argh!).

Don’t just comment out those areas in migdocs though; you are then turning off most of the data migration. Instead, create a copy of the migdocs.xml and modify it to include your rerouting exceptions, then use that as your custom XML and stop including the factory migdocs.xml.

There’s an example attached to this blog post down at the bottom. Note the exclude in the System context and the include/modify in the user context:

Don’t just modify the existing migdocs.xml and keep using it un-renamed either; that becomes a versioning nightmare down the road.


I'm reading up on CAPolicy.inf files, and it looks like there is an error in the documentation that keeps being copied around. TechNet lists RenewalValidityPeriod=Years and RenewalValidityPeriodUnits=20 under the "Windows Server 2003" sample. This is the opposite of the Windows 2000 sample, and intuitively the "PeriodUnits" should be something like "Years" or "Weeks", while the "Period" would be an integer value. I see this on AskDS here and here also.

You're right that the two settings seem like they should be reversed, but unfortunately this is not correct. All of the *Period values can be set to Minutes, Hours, Days, Weeks, Months or Years, while all of the *PeriodUnits values should be set to some integer.

Originally, the two types of values were intended to be exactly what one intuitively believes they should be -- *PeriodUnits was to be Day, Weeks, Months, etc. while *Period was to be the integer value. Unfortunately, the two were mixed up early in the development cycle for Windows 2000 and, once the error was discovered, it was really too late to fix what is ultimately a cosmetic problem. We just decided to document the correct values for each setting. So in actuality, it is the Windows 2000 documentation that is incorrect as it was written using the original specs and did not take the switch into account. I’ll get that fixed.


In your previous article you say that any registry modifications should be completed with resource restart (take resource offline and bring it back online), instead of direct service restart. However, official whitepaper (on page 16) says that CA service should be restarted by using "net stop certsvc && net start certsvc".

Also, I want to clarify about a clustered CA database backup/restore. Say, a DB was damaged or destroyed. I have a full backup of CA DB. Before restoring, I do I stop only AD CS service resource (cluadmin.msc) or stop the CA service directly (net stop certsvc)?

When you update the registry keys on the Active CA Cluster node, the Cluster service is monitoring the registry key changes.  When the resource is taken offline the Cluster Service makes a new copy of the registry keys to so that the other node gets the update.  When you stop and start the CA service the cluster services has no idea why the service is stopped and started, since it is being done outside of cluster and those registry key settings are never updated on the stand-by node. General guidance around clusters is to manage the resource state (Stop/Start) within Cluster Administrator and do not do this through Services.msc, NET STOP, SC, etc.

As far as the CA Database restore: just logon to the Active CA node and run the certutil or CA MMC to perform the operation. There’s no need to touch the service manually.


The Microsoft Premier Field Organization has started a new blog that you should definitely be reading.

Welcome to your nightmare (Thanks Mark!)

Totally immature and therefore funny . Doubles as a gender test.

Speaking of George Lucas re-imaginings, check out this awesome shot-by-shot comparison of Raiders and 30 other previous adventure films:

I am completely addicted to Panzer Corps ; if you ever played Panzer General in the 90’s, you will be too.

Apropos throwback video gaming and even more re-imagining, here is Battlestar Galactica as a 1990’s RPG :


Like Legos? Love Simon Pegg? This is for you.

What’s your New Year’s resolution? Mine is to stop swearing so much.